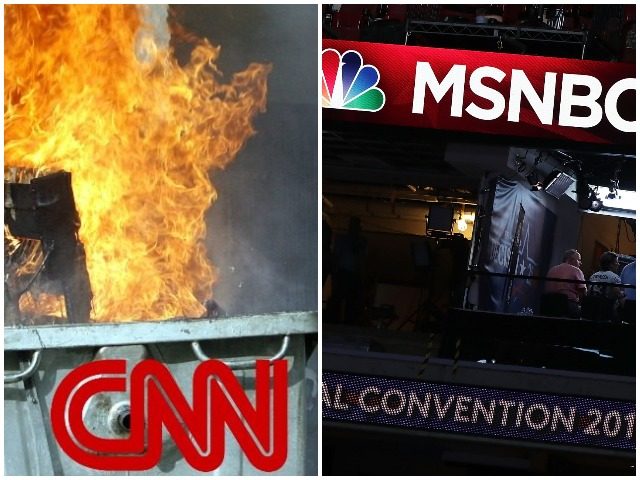 Nolte: Hurricane Dorian Can’t Save CNN, MSNBC from Losing over Fifth of Audience

Yep, even the massively over-hyped news about a mass shooting and a regional weather story — Hurricane Dorian — could not stop the bleeding at both of these far-left, Russia Collusion Hoax channels.

In all of cable television, throughout the 24 hour day, Fox News was numero uno for the 34th consecutive week with an average of 1.32 million total day viewers.

MSNBC was still in second place but came in way behind Fox with just 854,000 total viewers.

CNNLOL landed in sixth place with only 624,000 average viewers.

The news for CNNLOL and MSNBC was even worse during primetime. Whereas Fox News once again managed to grow its already massive audience by another three percent, MSNBC lost 15 percent of its primetime audience, while CNNLOL lost 16 percent.

Once again, CNNLOL proved that its terrible primetime line-up can’t even attract a million viewers.

Things will not get much better for CNNLOL this week. The flailing fake news outlet hurled a Hail Mary with a seven-hour town hall that managed to once again come in far-last place with only 1.1 million average viewers compared to the 2.5 million and 1.7 million Fox and MSNBC, respectively, attracted during these same seven hours.