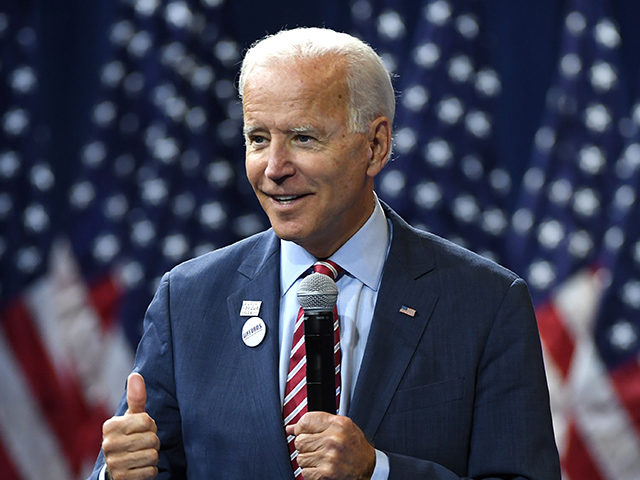 By TDO on 10/08/2019 0 Comments
LAS VEGAS, NEVADA - OCTOBER 02: Democratic presidential candidate, former U.S. Vice President Joe Biden speaks during the 2020 Gun Safety Forum hosted by gun control activist groups Giffords and March for Our Lives at Enclave on October 2, 2019 in Las Vegas, Nevada. Nine Democratic candidates are taking part in the forum to address gun violence one day after the second anniversary of the massacre at the Route 91 Harvest country music festival in Las Vegas when a gunman killed 58 people in the deadliest mass shooting in recent U.S. history. (Photo by Ethan Miller/Getty Images)

China announced Tuesday that it will not investigate accusations of corruption against former Vice President Joe Biden and his son, Hunter Biden, after President Donald Trump suggested the communist government should look into the pair’s questionable dealings in the country.

“China has long pursued the principle of non-interference in the internal affairs of other countries,” foreign ministry spokesperson Geng Shuang said in a statement, according to the South China Morning Post. “We have no intention of intervening in the domestic affairs of the United States. Our position is consistent and clear.”

Speaking to reporters outside the White House last week, President Trump floated the idea that China and Ukraine should probe the Biden family.

“China should start an investigation into the Bidens, because what happened in China is just about as bad as Ukraine,” the president said ahead of a visit to Florida to deliver remarks on Medicare.

As Breitbart News reported, Hunter Biden’s investment company secured a $1.5 billion investment deal with the Bank of China after traveling with his father on Air Force Two to the country in 2013.

Asked if Ukraine should follow suit with its own inquiry into the Bidens, President Trump replied: “I would think that if they were honest about it, they would start a major investigation,” before adding: “Nobody has any doubt that they weren’t crooked; that was a crooked deal, 100 percent.”

Biden forced out former Ukrainian prosecutor Viktor Shokin as he was investigating an energy company called Burisma Holdings, which was paying Biden [$83,000] as a member of its board. The former vice president even boasted to the Council of Foreign Relations last year that he had threatened to withhold $1 billion in U.S. aid unless the prosecutor was fired. (He did not tell the audience about his son’s role.)

While Democrats and establishment media figures were enraged by President Trump’s suggestion for China and Ukraine to probe the Biden, leading Republicans, including Vice President Mike Pence, voiced support for the move.

“In 2016, the American people elected President Trump and I for many reasons: get the economy moving again, to rebuild our military, but they also elected us to drain the swamp,” Pence told the Arizona Republic.“I think the American people have a right to know if someone who held the second-highest office in the land was involved in corrupt activities, either in China or in Ukraine.”