The collision of demographics and automation will potentially reshape South Korea’s economy by 2030.

A new analysis via Bloomberg shows the collision of these forces could trigger economic disruptions that might lead to a decade of financial volatility.

South Korea has one of the fastest aging populations in the world, and to counter these upcoming demographic challenges, corporations and the government are investing billions of dollars into building “smart factories” where automation and artificial intelligence will replace human workers.

Already South Korea has embraced robots in its manufacturing sector. About 3 million people, or about two-thirds of the workers in manufacturing, are at serious risk of losing their jobs to robots in the next decade. 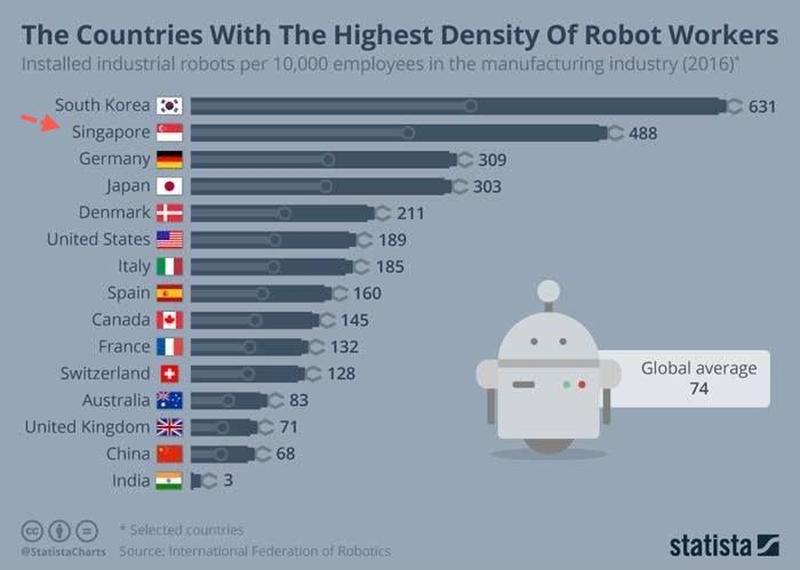 A new wave of investments in automation, artificial intelligence, and fifth-generation wireless networks could expedite the transition of robots replacing workers in smart factories.

The collision of automation in the workplace isn’t just going to reshape factories in South Korea — it will also lead to massive job losses in the service sector.

Services account for 70% of the South Korea economy, and this means job losses could be double or triple of what is expected in the manufacturing sector by 2030.

The most impacted service jobs are likely to be retailing, food services, and transportation.

The impact on the workforce is going to be so high that the government has already started creating “learning factories,” where about 50,000 people by 2022 will be reskilled to work on robots.

Jeong Jong-pil, a professor teaching factory automation at South Korea’s Sungkyunkwan University, told Bloomberg that the country’s demographic challenges are some of the drivers behind the rush to automate factories. “There’s no way to meet productivity targets without automation…That’s why more and more robots are coming.”

The impact of automation in manufacturing and service sectors will increase income inequality from already high levels to crisis levels.

Middle- and low-income families in the country will be wiped out, depressing consumer spending and economic growth.

South Korea is about to usher in a period of radical change, which will be one of the most important trends across the world that will reshape developed and emerging market economies by 2030.