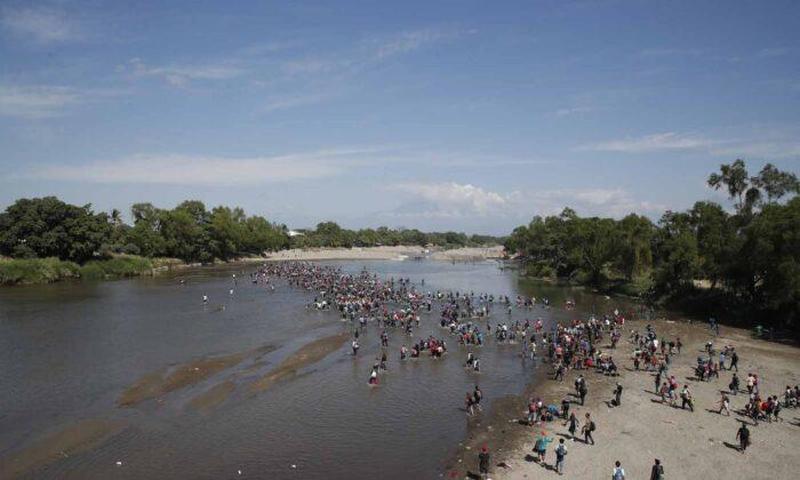 The head of the U.S. Department of Homeland Security (DHS), which oversees immigration enforcement, warned a new caravan of Central American migrants that they won’t be allowed into the United States.

“Being part of a large group, like a caravan, provides no special treatment or benefits to those who participate. Unfortunately, there have been acts of reported violence by some involved in this caravan,” acting DHS Secretary Chad Wolf said in a statement. “The Department is prioritizing the safety and security of our officers and the American people.”

“Should any members of the caravan reach the U.S.-Mexico border, they will be processed accordingly and quickly removed, returned, or repatriated,” he added.

His warning comes a day after Mexican police clashed with hundreds of migrantswho were attempting to enter Mexico from Guatemala, according to reports.

“Yesterday there was a group of some 1,000 who tried to enter the country by force. A tragedy was avoided, because there can always be a lot of problems, above all when there are children and women,” Foreign Minister Marcelo Ebrard told CNN.

“Despite the stones [National Guard personnel] were hit with, and a very tense situation, we can say that yesterday, if someone had the intention to provoke, they did not achieve that,” Ebrard said.

“If someone is looking for violence in Mexico, they are not going to find it on the part of authorities.”

As reported by NPR, the migrants are in Mexico and are being prevented from traveling through the country by Mexican National Guard members in riot gear.The Guatemalan government confirmed that around 4,000 migrants entered the country from Honduras.

One migrant told the news outlet:

“Our goal is to go to the United States. We aren’t turning around here.”

In his statement Wednesday, Wolf praised Mexican authorities’ measures to increase security at their southern border.

“I commend the government of Mexico for upholding their commitment to increased security and law enforcement at their southern border. The efforts by the Mexican National Guard and other officials have thus far been effective at maintaining the integrity of their border, despite outbreaks of violence and lawlessness by people who are attempting to illegally enter Mexico on their way to the United States,” Wolf said.

His agency is monitoring the caravan, adding that there are “dozens of personnel on the ground in Central America assisting local immigration and security officials, which have already led to hundreds of individuals being stopped, apprehended, and sent back to their home countries.”