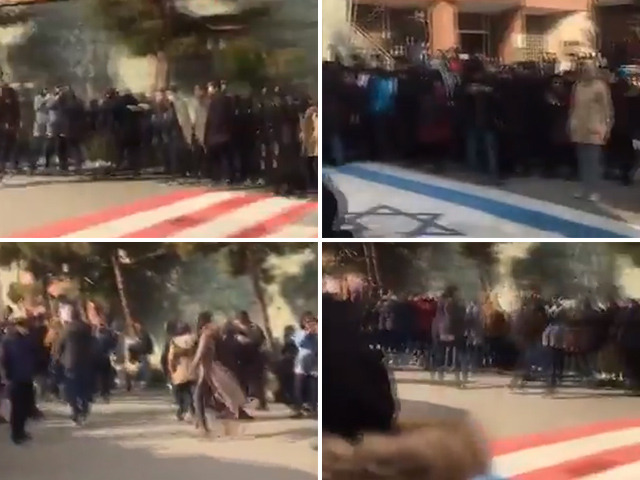 A video clip highlighted on Sunday by U.N. Watch, a non-governmental organization based in Switzerland, showed students at Iran’s Tehran University refusing to trample on American and Israeli flags as directed by agents of the Basij, a paramilitary force controlled by Iran’s Islamic Revolutionary Guard Corps (IRGC).

Students in Tehran University take pains to avoid walking on the flags of U.S. & Israel—as the regime forces people to do—and when two Basiji regime agents then make a point of trampling the flags, the crowds shout "Besharaf!" #بی‌شرف — the regime is shameless, dishonorable. pic.twitter.com/BLr5QKztr8

In the video, only a handful of Iranian regime agents were willing to walk on the flags. The students responded by heckling them as “dishonorable” and “shameless.”

Other video clips of the incident illustrated how much care the students took to avoid stepping on the flags:

Protestors in Iran are chanting:

We are not the enemy of the USA and Israel. Our enemy is the people of the Islamic Republic of Iran.

They are also refusing to walk on the American and Israeli flag that the government painted on the ground.

President Donald Trump approvingly commented on the trend Monday morning, hailing it as a sign of “big progress” in Iran:

Wow! The wonderful Iranian protesters refused to step on, or in any way denigrate, our Great American Flag. It was put on the street in order for them to trample it, and they walked around it instead. Big progress!