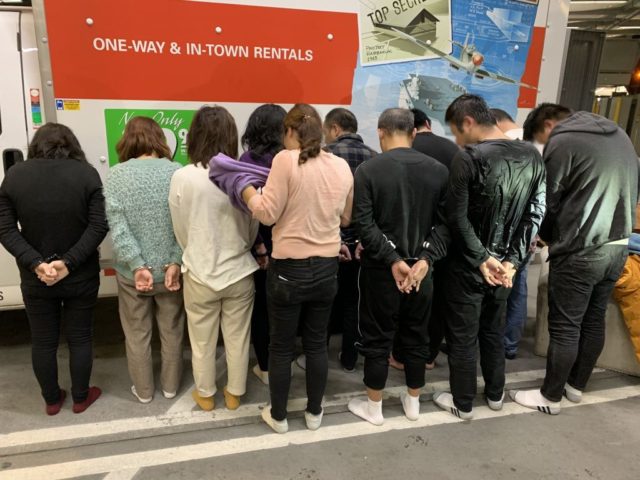 U.S. Border Patrol agents apprehended 1,155 Chinese migrants this fiscal year after they illegally entered from Mexico, Canada, or coastal boundaries. More than 95 percent came over the southwestern border between October 1, 2019, and January 31, 2020.

Breitbart Texas investigated the matter after Border Patrol agents in the Rio Grande Valley, Laredo, and Del Rio Sectors commented on the increasing numbers of Chinese migrants appearing in their sectors.

During Fiscal Year 2019, which ended on September 30, CBP reports show that Border Patrol agents apprehended 2,134 Chinese migrants after they illegally entered the U.S. The 1,155 apprehended during the first four months of FY2020 represents more than half of the total arrested during the entire previous year. In FY19, agents arrested 2,060 along the southwestern border, 47 along the northern border, and 27 along coastal boundaries.

Breitbart Texas asked Dr. Peter Hotez, Dean of the National School of Tropical Medicine at Baylor College of Medicine in Houston if the Chinese migrants represent a public health threat amid Coronavirus concerns. Dr. Hotez downplayed any threat due to the incubation period of the virus, currently estimated to be up to 14 days, according to the CDC. He did not believe the migrants posed a significant threat at this time.

However, Border Patrol Agent Chris Cabrera, in his capacity as spokesman for the National Border Patrol Council and Local 3307 (in the Rio Grande Valley Sector), told Breitbart Texas that some Chinese migrants arrive at the U.S. border within five to eight days after leaving their homeland. He also said some take as long as two months to complete their journey.

CBP officials responded to the issue of Chinese migrants as a public health threat, stating, “This fiscal year, the U.S. Border Patrol’s Rio Grande Valley Sector, has seen an increase in the number of Chinese nationals being apprehended, but the significance of that increase should not be overstated.”

The official reported that migrants from more than 148 countries have been arrested so far this fiscal year after they illegally entered the U.S.

“During the peak of the humanitarian crisis (May 2019), we were apprehending around 3 Chinese nationals per day,” the CBP official stated. ” This year we are seeing approximately 5 per day.”

CBP says that operationally, this is a very manageable number and represents an extremely small percentage of the overall daily apprehension totals. So far this year, Border Patrol agents apprehended 130,976 migrants who illegally crossed the southwest border into the U.S., according to CBP’s Southwest Border Migration Report. Chinese migrants make up 1,114 of that total (less than one percent).

“Although we haven’t encountered any issues to date, we do have measures in place to identify individuals with signs of illness who may be potentially infected with a communicable disease,” CBP officials stated.