Abraham Lincoln was born on February 12th two hundred and eleven years ago.

No national holiday commemorates the birthday of America’s first Republican president. It is a holiday for government employees in a handful of states including New York, Connecticut, and Illinois. While some may lament this, it is perhaps fitting that Americans honor Lincoln while laboring and that ensuring that the legacy of Lincoln does not perish from this earth is a task not of the federal government but of the people, by the people, for the people. 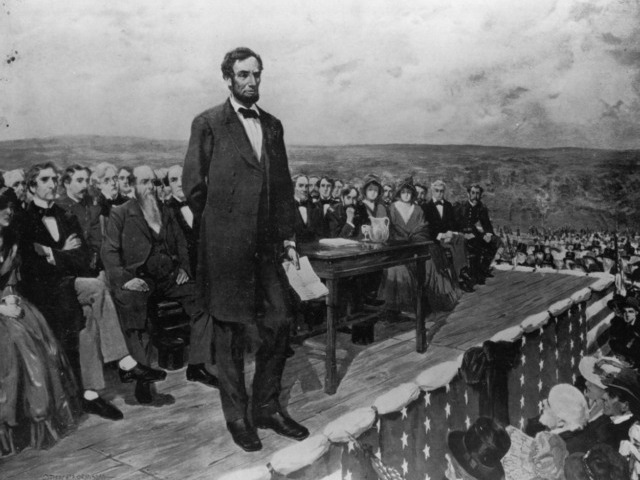 Lincoln is best known for his two most lasting legacies, the establishment of our union of states as indivisible and emancipation. He was a nationalist who never doubted that the United States government should put the American people first. Our boundaries mark out the United States as “the home of one national family,” Lincoln wrote.

He was a product of that vast continental home in a way that no previous president had been. His father came from Virginia. His grandfather from Pennsylvania. Prior to that, the mists of history descend but it is thought his people came out of New England. He was born in Kentucky. As a boy he lived in Indiana and as a young man he lived in Illinois.

Lincoln delivered his first political speech in 1832 at the start of his campaign for a seat in the Illinois state legislature.

Gentlemen, Fellow-Citizens: I presume you know who I am. I am humble Abraham Lincoln. I have been solicited by many friends to become a candidate for the Legislature. My politics are short and sweet, like the old woman’s dance. I am in favor of a national bank. I am in favor of the internal improvement system and a high protective tariff. These are my sentiments and political principles. If elected, I shall be thankful. If not, all will be the same.

Lincoln’s support of tariffs did not diminish with political experience. In his first campaign for a seat in the U.S. Congress, Lincoln declared, “Give us a protective tariff and we will have the greatest nation on earth.”

Lincoln did not share the groundless belief of so many opponents of the tariffs then and now that consumers ultimately bore the full cost of tariffs. In notes he wrote after his election to Congress in 1846, he explained that the costs of tariffs were not simply passed-through by consumer prices.

I suppose the true effect of duties upon prices to be as follows: If a certain duty be levied upon an article which by nature cannot be produced in this country, as three cents a pound upon coffee, the effect will be that the consumer will pay one cent more per pound than before, the producer will take one cent less in profits; in other words, the burden of the duty will (be) distributed over consumption, production and commerce, and not confined to either.

But if a duty amounting to full protection be levied upon an article which can be produced here with as little labor as elsewhere, as iron, that article will ultimately and at no distant day, in consequence of such a duty, be sold to our people cheaper than before, at least, by the amount of the cost of carrying it from abroad.

It has been reported that Lincoln once summed up his thoughts on trade by declaring, “I don’t know much about the tariff but I do know that if my wife buys her cloak in America, we get the money and the cloak, and that American labor is paid for producing it; if she buys her cloak abroad, we get only the cloak, the other country gets the money, and foreign labor receives the benefit.” While some historians have challenged the authenticity of this line, there is little doubt that it accurately reflects Lincoln’s thoughts.

As Pat Buchanan wrote in The Great Betrayal: How American Sovereignty and Social Justice Are Being Sacrificed to the Gods of the Global Economy, “The Great Emancipator was the Great Protectionist.”