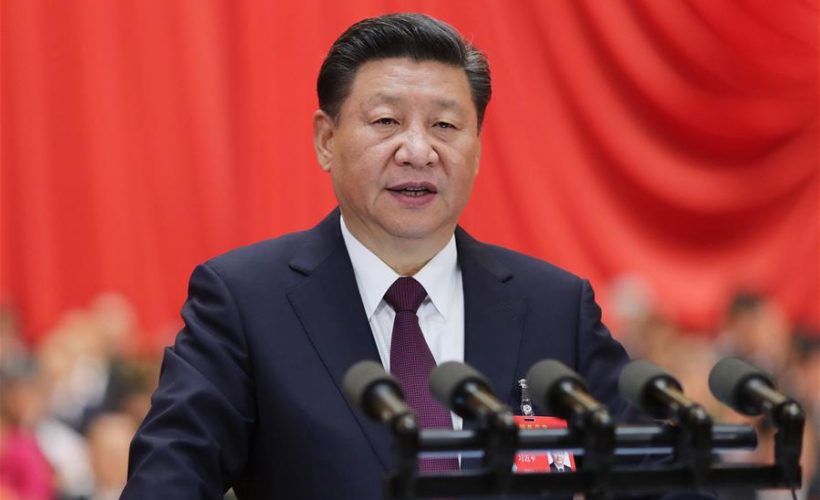 With China’s ambitions toward Hong Kong having emerged as the top political fault line in recent days, the market was closely following the start of Friday’s National People’s Congress (NPC) where in addition to disclosures on Chinese political strategy, Beijing announces decisions on targets on GDP, CPI and fiscal deficit.

Which is why many were surprised when in the text of Premier Li Keqiang’s annual address, for the first time China abandoned its usual practice of setting a numerical target for economic growth this year due to the turmoil caused by the coronavirus pandemic.

“I would like to point out that we have not set a specific target for economic growth this year,” the report said, according to Bloomberg which saw a leaked version. “This is because our country will face some factors that are difficult to predict in its development due to the great uncertainty regarding the Covid-19 pandemic and the world economic and trade environment.”

As Bloomberg adds, the shift away from a hard target for output growth not only breaks with decades of Communist Party planning habits, but is an admission of the deep rupture that the disease has caused in the world’s second-largest economy. With the growth outlook depending also on the efforts of trading partners to rein in the pandemic, the government is shifting its focus to employment and maintaining stability.

Among the various other economic goals disclosed by China, are:

While none of the above was especially remarkable (with the exception of the hint at QE), the reason why stocks gave the report a thumbs down is because as Premier Li also said, China will safeguard national security in Hong Kong, i.e., China plans on expanding its crackdown on Hong Kong sovereignty, a step that comes one day after China announced dramatic plans to rein in dissent by writing a new law into the city’s charter, and just hours after the Senate passed a bill that will retaliate against China should it do precisely that, effectively ensuring an even further deterioration in US-Sino relations.

“We will establish sound legal systems and enforcement mechanisms for safeguarding national security in the two special administrative regions, and see that the governments of the two regions fulfill their constitutional responsibilities,” Li said according to prepared remarks on Friday.

As Bloomberg adds, any attempt to impose security laws now could reignite the unrest that hammered the city’s economy last year and serve as a flash point amid broader U.S.-China tensions. Protesters urged democracy advocates to hold rallies across the city Thursday night, with one poster describing the moment as a “battle of life and death,” but mass demonstrations didn’t immediately materialize.

“This is the end of Hong Kong,” said Dennis Kwok, an opposition lawmaker representing the legal sector. “I foresee that the status of Hong Kong as an international city will be gone very soon.”

More importantly, we now have a timeline: the law is expected to pass China’s parliament before the end of its annual session May 28, so retail investors have about a week to ramping stocks higher before the trapdoor opens.

The legislation would still require several procedural steps including approval by the NPC’s decision-making Standing Committee, which could come as early as next month, the SCMP said. The move comes before citywide elections in September in which opposition members hoped to gain an unprecedented majority of the Legislative Council.

Although national security laws are required to be passed by Article 23 of the Basic Law, Hong Kong’s mini-constitution, successive governments have failed to pass them, with one effort in 2003 resulting in widespread street demonstrations. This new strategy could potentially allow authorities to skip the local legislative process, although the mechanics of how that would work remained unclear.

“It is absolutely necessary that the country’s top legislature fulfill its obligation to guarantee national security, by strengthening the legal framework with regard to Hong Kong,” the state-run China Daily said in a commentary. “There is nothing untoward in this as all countries attach the utmost significance to national security, and the introduction of such a law will safeguard the long-term stability and prosperity of Hong Kong.”

In addition to a more than 3% drop in Hong Kong stocks following the report of the imminent crackdown, three- and 12-month forwards on the Hong Kong dollar rose in New York trading, indicating traders expected more weakness ahead for the currency, which slipped the most in six weeks earlier in the day.

“The market is taking this news negatively for Hong Kong given the likely return of violent protest activities, higher risk for the U.S. to remove certain preferential terms for Hong Kong, such as the special tariff status, and risk-off sentiment,” said Becky Liu, head of China macro strategy at Standard Chartered Bank Ltd.