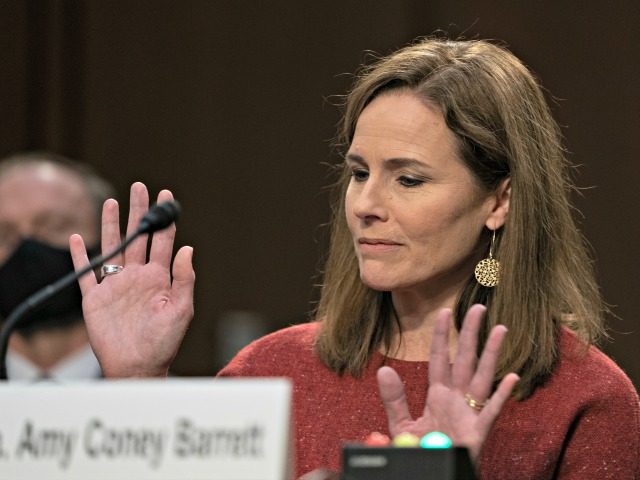 5:40 PM: Graham says Barrett is one of the most incredible humans he has ever met. He calls her judicial philosophy “mainstream” and someone Republicans should be picking for the Supreme Court. Graham says the hearings probably didn’t change anybody’s minds, but he hopes the American people got to know more about Barrett after the hearings. He says with “Amy Barrett, the best is yet to come.” Graham also says in another place and in another time she would get a lot more votes.

Graham says he think Barrett has met every test and will have his full support. Graham says Barrett has broken new ground in a positive way for the country.

He says the committee will go in closed session to hear the FBI’s evaluation and the hearing part is over. Graham says Barrett can have two glasses of wine tonight.

5:23 PM: Blackburn thanks Barrett for her endurance. She accuses Democrats of engaging in “intellectual isolationism.” She says she has found a few things said about Barrett to be “unnecessarily condescending.” She accuses some on the left of wanting to “verbally pound” Barrett to submitting to more leftist ideas.

Blackburn says the left has accused Barrett of being a conservative activist judge and assures them that she won’t be because conservatives want originalists and textualists and not activists.

She says the American people are not afraid of Barrett no matter how much Democrats try to paint a caricature of Barrett. She says Democrats enjoy mocking and belittling conservative women because to them it is “political sport” and the “politics of personal destruction.” She says “it is wrong.”

5:11 PM: Kennedy says America is not racist but has racists in it. He talks about going from institutionalized slavery to an African American president in the blink of an eye. Kennedy says Harris thinks some states are wicked and others are pristine. Kennedy, after jabbing California for wanting to tax anything that moves, says California has a deep history of discrimination against Asians and Hispanics.

5:08 PM: Kennedy, before saying he thinks Harris believes America is systemically racist, wants to give Barrett a chance to answer some of Harris’s accusations.

He asks Barrett if she is a racist. Barrett says she is not.

(Kennedy’s way of asking this type of question does Barrett no favors and opens her up to awkward soundbites).

He asks if Barrett is against clean air and bright water. Barrett says she is not.

He asks if Barrett supports science. She says yes.

He asks if Barrett supports children and prosperity. She says yes.

He asks if Barrett hates warm puppies. She says no.

4:50 PM: Harris says the Voting Rights Act was not inevitable and speaks extensively about the late John Lewis. She says every year he reminded Americans that black Americans were not guaranteed the right to vote and the brutality they had to endure to get the right to vote.

She says many of her colleagues have asked Barrett about Shelby but it is important to revisit the case that “gutted the Voting Rights Act.” She says what the majority of justices did not understand was the success was due to the “brilliance” of Section Five of the Voting Rights Act and its monitoring and enforcement capabilities.

Harris says Barrett has sided with corporations over workers 85 percent of the time.

Harris said Roberts was asked about the Constitutionality of Section Two during his confirmation hearing and said he did not see it as Constitutionally suspect. She agrees with Roberts.

Judge Barrett to @senkamalaharris: "You have asked me a series of questions like, that are completely uncontroversial…and then trying to analogize that to eliciting an….opinion from me that is on a very contentious matter of public debate. I will not do that." #SCOTUS pic.twitter.com/pPoWaaXtyY

Harris then says these proceedings lack legitimacy. Harris says, “sadly,” her Republican colleagues are doing “great harm” with this “illegitimate process” and, if they succeed, will do great harm to the people of the United States and the Supreme Court.

Crapo says he finds it incredible that a mother of children of different races could be accused of not being sensitive to different races and committed to equal justice under the law.

Crapo gives Barrett to talk about stare decisis and says he is amazed that Barrett is being accused of being a conservative activist judge.

4:07 PM: Spartacus now gets his 20 minutes. He asks Barrett about the public charge rule, and she says at the conclusion of her dissent, she wasn’t resolving the issue and did leave open the possibility that the rule could be “arbitrary and capricious.” Booker asks Barrett if it is wrong to separate children from their parents to deter immigrants from coming to the United States. She says that’s a matter of hot political debate that she can’t be drawn into as a judge. Booker asks if it is wrong to separate a child from a parent to “send a message” and asks, as a human being, if that is wrong. Barrett says she can’t be drawn into a debate about the Trump administration’s immigration policy.

Booker says we are debating things about human rights and “human dignity.”

He now brings up implicit bias in the criminal justice system and asks her what law review articles she has read on the issue. She says she has not done research and most of what she has learned has been through conversations. Booker now talking about the war on drugs and the disproportionate impact on people of color. He says there was lots of drug use at Stanford and few arrests while there are lots of arrests in inner cities.