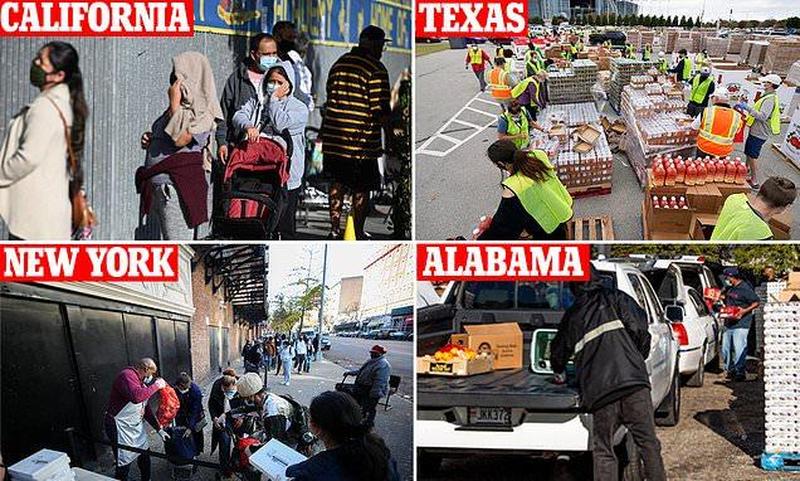 Millions of Americans face food and housing insecurity this holiday season. The unemployment rate stands around 6.9%, with more than ten million folks still out of work. Permanent job loss continues to soar, now about 3.8 million, as a double-dip recession becomes increasingly likely by year-end.

We recently pointed out that food bank lines continue to increase across the country as the virus-induced downturn continues to inflict financial devastation on the working poor.

Thousands of cars lined up to collect food in Dallas, Texas, over the weekend, stretching as far as the eye can see. pic.twitter.com/xLFGOcBkPK

The Daily Mail has compiled a list of food banks across the country reporting a surge in demand ahead of the holidays next week.

On Friday, US military personnel handed out food in a “massive food drive” at a food bank in Arlington, Texas.

Hundreds of cars were seen at the event organized by Tarrant Area Food Bank. It was described as the “largest food drive” in their history.

Here’s a woman rummaging through a food bank set up inside a church in Wilkes-Barre, Pennsylvania.

Volunteers at a food bank in Los Angeles distributed 1,500 meals on Friday.

The Thanksgiving reality of smaller family gatherings is also being met with a growing number of Americans going hungry.

The Greater LA Food Bank says demand this year is up 145%, as lines for Thanksgiving turkeys stretched for miles in Dallas on Friday. pic.twitter.com/qB9XkrnJlv

In New York City, a food bank is handing out care packages to hungry folks as the city continues to deal with depressionary unemployment amid a Covid winter.

On Saturday, hundreds of cars were lined up for a food bank distribution in North Jersey.

A Twitter user records huge lines outside one food bank. No location was given.

Today I saw a food bank distribution center with a line of cars miles long, full of people who need assistance to have enough to eat. My heart aches.

If you’re able, consider joining with me and donating to your local food bank. They are doing much needed work right now. pic.twitter.com/UJ7FxKICaF

A Milwaukee food bank this morning has a traffic jam of hungry people waiting for care packages.

This is the line for the food bank in front of my friend’s apartment building in Milwaukee this morning. I hope you are proud of all your many accomplishments @realDonaldTrump. P.S.#YouLostGetOverIt #TrumpIsANationalDisgrace #BidenHarris2020 pic.twitter.com/X9QKmzJynU

Nationwide, food bank lines are surging ahead of the holiday season.