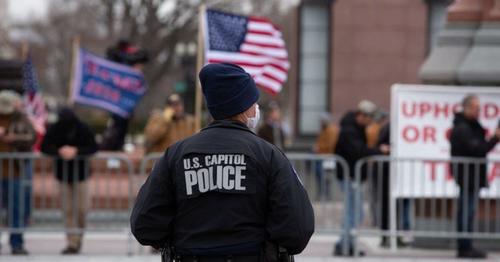 Authored by Joe Saunders via The Western Journal,

When it comes to Democrats’ newfound support for police officers, Blue Lives Matter isn’t buying it.

The pro-police group has rarely been shy about sharing its feelings with its 79,000 Twitter followers, but recent statements by Democratic leaders regarding law enforcement after last week’s violence in the nation’s Capitol left no doubt where the organization stands.

And it’s safe to say that it’s not on the left.

In a tweet Monday night, the group took aim at public declarations of appreciation for police from members of the same political party that stood by for most of last year as law enforcement officers nationwide were attacked – either physically in the streets or verbally in the mainstream media.

Some Democrats even joined in, with ludicrous calls to “defund the police” and painting all men and women who wear the badge as potential white supremacists operating under cover of law.

The showing of love & compassion today from Democrats & Liberals for the welfare of police officers is amazing. Too bad it never showed up while cops were being murdered by #BLM crowd while cities were being burned to the ground for months on end. Why now? Nevermind. We know. pic.twitter.com/nv5uWGvKNH

“The showing of love & compassion today from Democrats & Liberals for the welfare of police officers is amazing,” Blue Lives Matter tweeted. “Too bad it never showed up while cops were being murdered by #BLM crowd while cities were being burned to the ground for months on end. Why now? Nevermind. We know.”

It wasn’t clear if the post was referring to a specific event Monday or the general air of indignation that’s emanated from the left since Wednesday’s incursion into the Capitol by a mob of President Donald Trump supporters bent on disrupting the session of Congress intended to certify the results of the Electoral College vote for President-elect Joe Biden.

One member of the Capitol Police force who was on duty during the violence, Officer Brian Sicknick, died Thursday night.

The circumstances surrounding Sicknick’s death are unclear. While a New York Times report, citing unidentified “law enforcement officials,” stated that he was injured being struck in the head by a fire extinguisher, no official cause has been released. The officer’s family has asked that the death not be politicized.

ABC News reported Friday that an underlying medical condition had “driven” Sicknick’s death, though it’s being investigated as a homicide.

And there’s been no shortage of Democrats willing to take a stand now on behalf of police officers in a context that it can make the president — a man they’ve despised since before he even became the Republican nominee in 2016 — look bad.

House Speaker Nancy Pelosi’s statement was particularly cynical in this regard.

“The violent and deadly act of insurrection targeting the Capitol, our temple of American Democracy, and its workers was a profound tragedy and stain on our nation’s history,” the statement said.  “But because of the heroism of our first responders and the determination of the Congress, we were not, and we will never be, diverted from our duty to the Constitution and the American people.”

Funny how the “heroism of our first responders” wasn’t exactly high on Democrats’ list when the country was being rocked for months by riots by Black Lives Matter groups triggered by the death of George Floyd while in the custody of Minneapolis police in May and the fatal shooting of a Louisville, Kentucky, woman during a police raid in March.

“The sacrifice of Officer Sicknick reminds us of our obligation to those we serve: to protect our country from all threats foreign and domestic,” Pelosi added, with an implicit accusation that Trump and his supporters are a “threat” to the country.

Meanwhile, Rep. Don Beyer, a Virginia Democrat, issued a statement on Sicknick’s death praising the officer as a “constituent who made the ultimate sacrifice while protecting those trapped in the Capitol.”

This is the same Rep. Beyer who released a statement praising the passage of a police reform bill in June by invoking the implicit stereotype that police departments are racist organizations that pose a particular threat to black suspects. Research by the Manhattan Institute’s Heather MacDonald has shown that black people actually make up a smaller percentage of police shootings than the crime rate would predict.

“All lives will not matter until Black lives matter. I thank the Congressional Black Caucus for their leadership drafting strong, ambitious legislation that our country needs right now,” Beyer’s statement said.

There was more, of course. Democrats, ever alert to a chance to attack the president and his supporters, would like nothing better than to pretend to love law enforcement while at the same time championing a strain of progressive liberalism that has made attacks on police departments part of its playbook — with disastrous results.

But Blue Lives Matter, a “media company founded and run entirely by active and retired law enforcement officers,” wasn’t fooled — any more than any sane American should be.

“You stood by us through it all and still do,” the tweet stated.