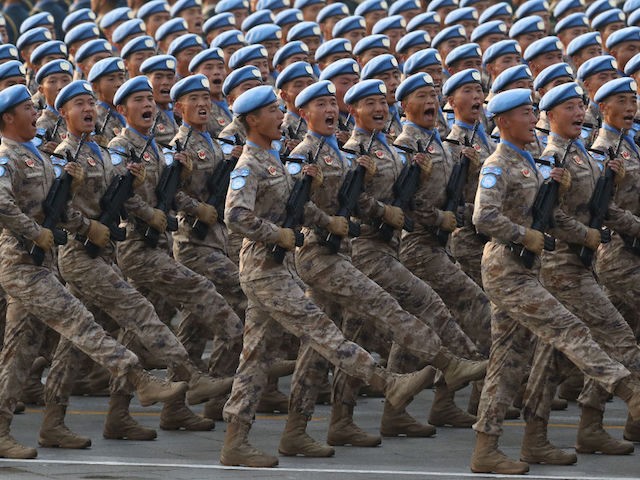 China Boasts of Military Buildup While Pushing ‘Dialogue’ with U.S.

Chinese state media boasted of China’s massive military buildup over the weekend while simultaneously claiming Beijing wants nothing more than to renew friendly dialogue with the United States under the Biden administration.

China’s state-run Global Times reported Sunday that the People’s Liberation Army (PLA) has developed “a new type of training system that would improve military training in all respects, strengthen the capability to win wars and build the Chinese military into a world-class one.”

The Global Times did not discuss the system, approved by dictator Xi Jinping — whose many titles also include Chairman of the Central Military Commission — in detail, but the article hinted it would include some combination of real-world combat drills and high-tech simulations. The goal is to “train as if exercises are real wars, boost joint exercises, enhance training with technology, strengthen talent support and follow patterns and laws of training and winning wars.”

A Chinese military expert whom the Global Times quoted said the new training regimen will combine “training with real combat, to the extent that the two need to be highly identical.” This has been the fundamental goal of all serious military training throughout human history, so it is interesting that Chinese state media felt the need to brag that its soldiers are really digging in and learning how to be killers now.

The article included a sideswipe at the supposedly more warlike United States, combined with extensive self-flattery of the Chinese Communist Party (CCP) as a peace-loving organization:

Unlike the US military, which has operated around the globe and has been constantly in battles, which means it retains its sharpness, China has not fought a real war for decades, so training is one of only a few ways to hone combat capabilities, and that is why high-quality training is very important to the Chinese military, another Chinese military expert told the Global Times on Sunday on condition of anonymity.

The new military training system aims to eliminate malpractices that have accumulated through prolonged peace to make the military more ready for engaging in wars, even if China never wants any, the anonymous expert said.

The day after the Global Times touted this new super-warrior program for the PLA, it quoted Foreign Minister Wang Yi claiming China wants nothing but peaceful dialogue with the new American administration:

“Over the past few years, the US basically cut off bilateral dialogue at all levels. And this was one of the main reasons for the deterioration in China-US relations,” Wang Yi said in his address to the Opening of the Lanting Forum on Promoting Dialogue and Cooperation and Managing Differences: Bringing China-US Relations Back to the Right Track.

“We urge the US to stop smearing the Communist Party of China and China’s political system, stop conniving with or even supporting the erroneous words and actions of ‘Taiwan independence’ forces, and stop undermining China’s sovereignty and security on internal affairs concerning Hong Kong, Xinjiang and Tibet,” Wang added, listing four places whose residents would strongly dispute the idea that the gentle and peaceful CCP is only just beginning to learn how to fight wars effectively because it loathes violence.