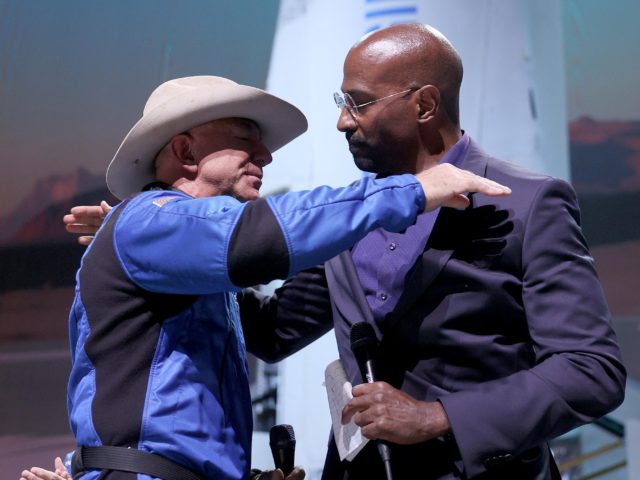 Jeff Bezos announced he is giving away $100 million each to activist Van Jones and humanitarian José Andrés during a press conference Tuesday morning following his ten minute space flight with his company Blue Origin.

At the end of the press conference, Bezos said, “I have a little surprise for you. I am announcing today, a new philanthropic initiative … The Courage and Civility Award. It recognizes leaders who aim high, and who pursue solutions with courage, and who always do so with civility.”

Bezos said that “we should question ideas, not the person. … We need unifiers and not vilifiers. We want people who argue hard and act hard for what they truly believe.”

“We do have role models,” Bezos said before the slideshow introduced Jones as the first recipient of the $100 million award. The award is designed for the recipients to give to charities of their choice.

Bezos has a net worth of more than $204 billion, a fortune he built through online retail giant Amazon. Bezos also owns the Washington Post.

After being announced as the winner, Jones came on stage and said, “I appreciate you [Jeff Bezos] for lifting the ceiling off of people’s dreams.”

The self-avowed communist did not specify how he intends to use the money.

The press conference then aired a video praising Jones for bringing together “climate justice and racial justice.”

The second $100 million award was then given to Andrés, a Spanish chef who founded World Central Kitchen to provide meals during natural disasters. The video about Andrés featured Hillary Clinton praising him: “He is bigger than life, a force of nature, and a real gift.” Andrés is also a vocal critic of former President Donald Trump.

The former Green Jobs Adviser to Barack Obama, Jones signed a “9/11 truth statement” in 2004, asking for an investigation to if the Bush Administration knew about the World Trade Center Attacks before they occurred. Jones defended his signature in 2009, explaining that the petition did not reflect his personal views and that he did not read the petition closely.

He then stepped down from his position in the Obama Administration.

Jones also came under fire at that time for calling Republicans “assholes.” He also later claimed that conservatives have “cheap patriotism” and are willing to “kill” children for jobs.

In 2016, Jones called Trump’s victory in the presidential election a “whitelash against a black president.”

Later, Jones admitted that Trump “has done good stuff for the black community,” and even worked with the Trump administration on criminal justice reform.

On election night 2020, however, in support of now-President Joe Biden, he said, “The fact that it’s this close, I think is — it hurts. It just hurts.”
He later tearfully celebrated Biden’s win on CNN: