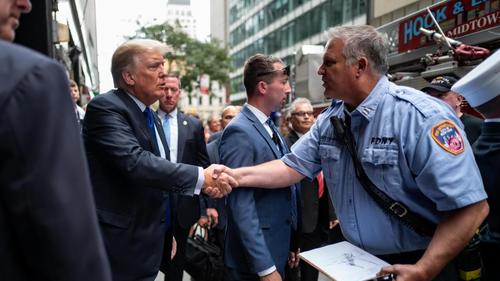 While President Biden joined former presidents Obama, Bush and Clinton at 9/11 services held at the World Trade Center and Shanksville, Pennsylvania – a group which presided over the deaths of countless Middle Easterners over 20 years of undeclared “wars on terror” that benefited the US Homeland Security-Industrial Complex and a few others, former President Trump took to the streets of New York to shake hands with first responders.

It was quite the juxtaposition to say the least – with former President Bush pushing the ‘domestic terrorism‘ and ‘angry America’ narrative during a speech in Shanksville (echoing Klaus Schwab), and images of Biden pulling down his mask to shout at someone…

Vs. President Trump being greeted by working men and women in uniform who won’t go home to mansions after the ‘ceremonies’ are over.

We can’t imagine it would go as well for Biden and the other former presidents.