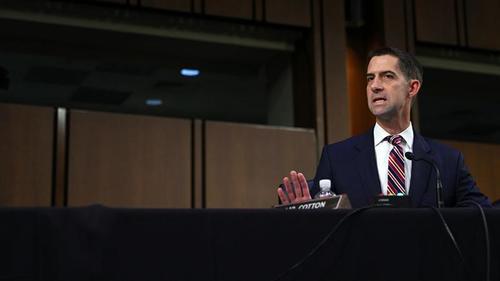 Senator Tom Cotton warned Monday that hundreds of unvetted and undocumented refugees rescued from Afghanistan are fleeing military bases within the U.S.

Cotton detailed the incidents in a letter to Department of Homeland Security (DHS) Secretary Alejandro Mayorkas, writing “it is alarming that hundreds of Afghan evacuees have reportedly left U.S. military bases directly into our communities, possibly before completing our vetting and immigration processes.”

Reuters picked up on the fact that that at least 700 Afghans have escaped U.S. bases in Wisconsin, Virginia, Texas, Indiana, New Mexico, and New Jersey.

The report notes that at Fort Bliss in El Paso, Texas, more than 300 Afghans have left since they started arriving a few weeks ago.

The Biden administration has outlined plans to bring at least 95,000 Afghans to the U.S., yet hundreds are being allowed to leave without completing the resettlement process.

“A more extensive review and vetting process is absolutely essential for the tens of thousands of unknown Afghans who were airlifted during the evacuation,” Cotton further wrote.

The Senator also documented several cases of criminal behaviour among the evacuees.

“The U.S. government is currently investigating multiple crimes committed in evacuee facilities,” Cotton wrote, adding “The American people have seen reports of a group of male Afghan evacuees assaulting a female servicemember at a Fort Bliss facility in New Mexico.”