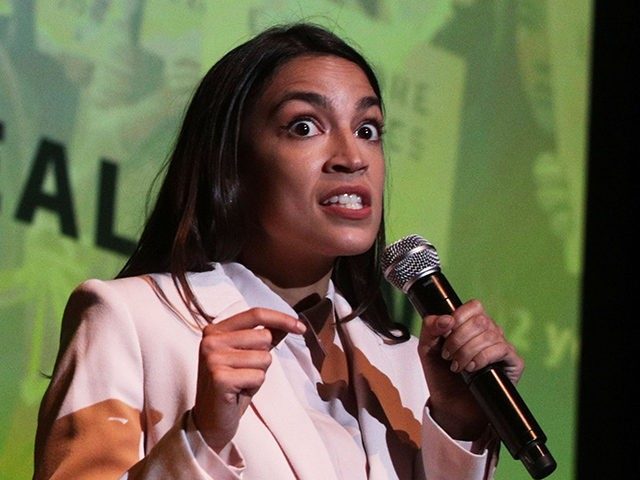 Open socialist Alexandria Ocasio-Cortez (D-NY) promoted bail reform efforts just one day after the Waukesha, Wisconsin, Christmas parade, where the suspect – Darrell E. Brooks Jr., who has an extensive criminal record – was released on $1000 bond days prior to when he allegedly plowed an SUV into crowds of people.

In a tweet on Monday morning, AOC shared a letter that she penned with Rep. Carolyn Maloney (D-NY) and Rep. Jamie Raskin (D-MD) asking New York City’s five District Attorneys for information on “excessive bail in the NYC court system – particularly for low-income defendants.” She tweeted:

More than 75% of individuals in custody haven’t been convicted of a crime, and are confined in unsafe conditions simply because they cannot afford cash bail. Condemning thousands of individuals to languish in such environments as they await trial is unacceptable.

More than 75% of individuals in custody haven’t been convicted of a crime, and are confined in unsafe conditions simply because they cannot afford cash bail. Condemning thousands of individuals to languish in such environments as they await trial is unacceptable.

The letter focused primarily on New York City’s Rikers Island, alleging that “thousands of individuals” have been forced to languish in terrible conditions. The letter said:

We have grave concerns that excessive bail amounts are leading to unnecessary pretrial detention and contributing to a humanitarian crisis in New York City’s jail system, particularly on Riker’s Island. 14 people of died this year in the custody of New York City Department of Corrections.

The letter further emphasized that “federal intervention” may be necessary.:

Condemning thousands of individuals to languish in an environment plagued by persistent overcrowding and mounting violence as they await trial is not acceptable, and risks violating the federal civil rights of these individuals. If these conditions are not addressed, federal intervention may be necessary to protect detainees from additional harm.

The topic of bail reform was thrust into the national spotlight on Monday after Darrell E. Brooks Jr. was identified as the suspect arrested for the Waukesha massacre. According to Wisconsin court records, a 39-year-old Darrell E. Brooks of Milwaukee had one pending charge of felony bail jumping and one charge of felony 2nd degree recklessly endangering safety with domestic abuse assessments. He also had one misdemeanor charge of resisting a police officer, disorderly conduct, and battery. The alleged offenses occurred on November 2, 2021; this same Brooks was released on a $1000 bond on November 19 – just two days before the attack.