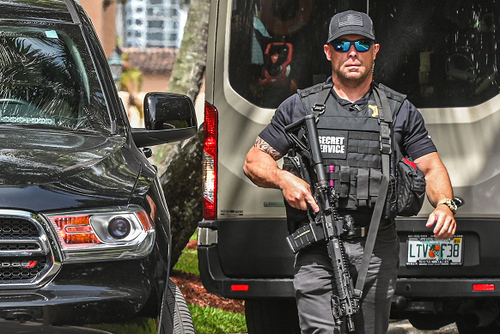 Taibbi: Welcome To The Third World

[The Justice Department] must immediately explain the reason for its raid and it must be more than a search for inconsequential archives, or it will be viewed as a political tactic and undermine any future credible investigation and legitimacy of January 6 investigations.

Headline from Politics Insider this morning:

We’ve reached the stage of American history where everything we see on the news must first be understood as political theater. In other words, the messaging layer of news now almost always dominates the factual narrative, with the latter often reported so unreliably as to be meaningless anyway. Yesterday’s sensational tale of the FBI raiding the Mar-a-Lago home of former president Donald Trump is no different.

As of now, it’s impossible to say if Trump’s alleged offense was great, small, or in between. But this for sure is a huge story, and its hugeness extends in multiple directions, including the extraordinary political risk inherent in the decision to execute the raid. If it backfires, if underlying this action there isn’t a very substantial there there, the Biden administration just took the world’s most reputable police force and turned it into the American version of the Tonton Macoute on national television. We may be looking at simultaneously the dumbest and most inadvertently destructive political gambit in the recent history of this country.

The top story today in the New York Times, bylined by its top White House reporter, speculates this is about “delayed returning” of “15 boxes of material requested by officials with the National Archives.” If that’s true, and it’s not tied to January 6th or some other far more serious offense, then the Justice Department just committed institutional suicide and moved the country many steps closer to once far-out eventualities like national revolt or martial law. This is true no matter what you think of Trump. Despite the early reports of “cheers” in the West Wing, the mood in center-left media has already drifted markedly from the overnight celebration. The Times story today added a line missing from most early reports: “The search, however, does not mean prosecutors have determined that Mr. Trump committed a crime.” There are whispers throughout the business that editors are striking down certain jubilant language, and we can even see this playing out on cable, where the most craven of the networks’ on-air ex-spooks are crab-crawling backward from last night’s buzz-words:

The hugeness of the story has become part of its explanation. An action so extreme, we’re told by expert after expert, could only be based upon “pulverizing” evidence.

Throughout the Trump years we’ve seen a numbing pattern of rhetorical slippage in coverage of investigations. The aforementioned Politics Insider story is no different. “Likely” evidence in the headline becomes more profound in the text. An amazing five bylined writers explain:

Regardless of the raid’s focus legal experts quickly reached a consensus about it: A pile of evidence must have backed up the warrant authorizing the search.

They then quoted a “former top official in the Justice Department’s National Security Division” — you’ll quickly lose track if you try to count the named and unnamed intel spooks appearing in coverage today — who said, “There’s every reason to think that there’s a plus factor in the quantum and quantity of evidence that the government already had to support probable cause in this case.”

Politico insisted such an action must have required a magistrate’s assent “based upon evidence of a potential crime.” CNN wrote how authorities necessarily “had probable grounds to believe a crime had been committed,” while the New York Times formulation was that “the F.B.I. would have needed to convince a judge that it had probable cause that a crime had been committed.” Social media was full of credentialed observers explaining what must be true. “The affidavit in support of the MAL search warrant must be something else,” said Harvard-trained former Assistant U.S. Attorney Richard Signorelli, one among a heap of hyperventilating names:

It’s amazing how short our cultural memory has become. Apparently few remember all the other times this exact rhetoric was deployed in the interminable list of other Trump investigations, only to backfire later. Does anyone remember this doozy?