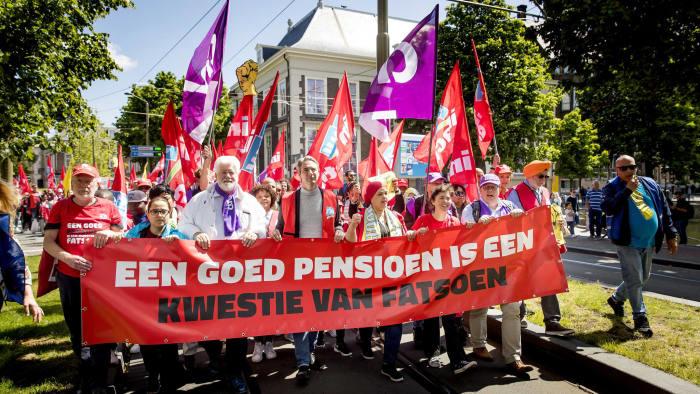 Netherlands Headed For Unprecedented Crisis: Millions Of Retirees Face Pensions Cuts Thanks To The ECB

When one thinks of pensions crisis, the state of Illinois – with its woefully underfunded retirement system which issues bonds just to fund its existing pension benefits – usually comes to mind. Which is why it is surprising that the first state that may suffer substantial pension cuts is one that actually has one of the world’s best-funded, and most generous, pension systems.

According to the FT, millions of Dutch pensioners are facing material cuts to their retirement income for the first time next year as the Dutch government scrambles to avert a crisis to the country’s €1.6 trillion pension system. And while a last minute intervention by the government may avoid significant cuts to pensions next year – and a revolt by trade unions –  if only temporarily, the world finds itself transfixed by the problems facing the Dutch retirement system as it provides an early indication of a wider global pensions funding shortfall, not to mention potential mass unrest once retirees across some of the world’s wealthiest nations suddenly finds themselves with facing haircuts to what they previously believed were unalterable retirement incomes.

At the core of the Dutch cash crunch is the ECB’s negative interest rate policy, which has sent bond yields to record negative territory across the eurozone, and crippled returns analysis while pushing up the funding requirements of Dutch pension funds.

Ahead of a parliamentary debate on Thursday on this hot topic issue, the Dutch minister for social affairs and employment, Wouter Koolmees, will write to lawmakers to outline his response to the pension industry’s problems, the FT reported.

In order to offset the ECB’s NIRP policy, Shaktie Rambaran Mishre, chair of the Dutch pension federation which represents 197 pension funds and their members, said that contributions might have to rise by up to 30% over the next few years, an outcome which will lead to outrage among existing working-age employees who will suffer a surge in the pension costs. Absent a dramatic increase in benefits contributions, “as things stand, around 2 million people are facing cuts from next year,” she added.

Predictably, trade unions have already held protests and strikes this year over the potential cuts to pensions and have threatened more action if the government does not step in. “We expect some relief next week and if not we will mobilise,” said Tuur Elzinga, lead pensions negotiator at FNV, the biggest Dutch union.

The Netherlands – one of the Eurozone’s richest nations – is hardly alone in this predicament, as the ongoing debate reflects broad concerns about the impact of low interest rates among the Eurozone and Japan, as ageing populations and longer life expectancy have put pension systems across the world under great strain. A report last week from the Group of Thirty, a club for current and former policymakers, warned of a $15.8tn shortfall in funding to support the ageing populations of the world’s 20 biggest countries.

And if there is one way to guarantee riots among the world’s richest nations, it is to inform pensioners that their benefits are suddenly being “haircut.”