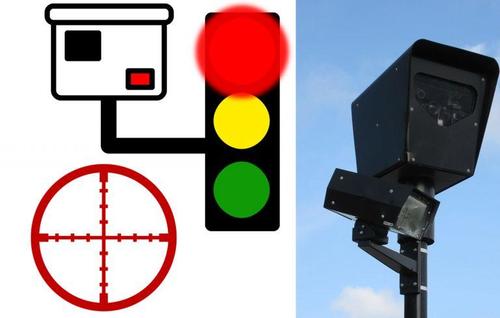 Crime is surging in American cities, but the official data leave out the most frequent source of highway robberies. More than 400 cities have set up red light cameras that are institutionalized racketeering that subverts public safety. Tens of thousands of American drivers have been injured and many people killed as a result of reckless revenue pursuit by local governments.

Local governments have partnered with private companies to build, deploy, and maintain the cameras that bring bounty hunting to traffic intersections. Violations routinely hammer drivers for a hundred dollars a shot, and California skewers transgressors for up to $500.

The evidence is clear

Red light cameras have proliferated despite overwhelming evidence of their perils. In 2004, a U.S. Department of Transportation–financed study examined hundreds of red light cameras around the nation and revealed that they were “associated with higher levels of many types and severity categories of crashes.” In 2005, six years after the District of Columbia set up a red light regime that generated more than 500,000 tickets, a Washington Post analysis revealed that “the number of crashes at locations with cameras more than doubled.” A 2007 Virginia Department of Transportation study concluded that cameras were associated with a 29 percent “increase in total crashes.” A 2013 report by the Pennsylvania Department of Transportation revealed “a 27 percent increase in the number of collisions involving an injury at red-light cameras intersections” in Philadelphia.

With each passing year, more evidence has piled up proving the perils of red light cameras. The Florida Department of Highway Safety and Motor Vehicles analyzed traffic crash data and reported in 2016 that “fatalities from accidents doubled” at intersections with red light cameras. A Case Western Reserve University 2017 analysis predicted a 28 percent decrease in non-angle auto accidents if red light cameras were removed in Houston and Dallas.

Chicago Tribune reporter David Kidwell, who exposed the chicanery behind his city’s red light regime, explained, “When you throw a red light camera up at an intersection, it creates a psychological problem because you’ve got all of these things going on in the driver’s mind. And one of them is, ‘Wow. If I don’t stop here and I go through on a short yellow at the very end, I’m gonna get nailed.’” Drivers slammed on the brakes — resulting in a “22 percent increase in rear-end accidents at these intersections that have red light cameras.”

Short yellow lights are also death warrants. Numerous federal studies have shown that the most effective and simplest step to reduce collisions at traffic lights is to lengthen the time of the yellow light to allow drivers more time to stop. A 2001 congressional report found that the time for yellow lights had been sharply shortened since the 1970s and that “inadequate yellow times are the likely cause of almost 80 percent of red light” violations. A Federal Highway Administration report concluded that “a one second increase in yellow time results in 40 percent decrease in severe red light related crashes.” Denton, Texas, added one second to yellow lights and reduced red light camera violations by almost two-thirds. After Georgia mandated longer yellow lights in 2009, the revenue from red light cameras collapsed by up to 90 percent in many localities.

However, red light camera companies “often specify maximum yellow light times, and impose financial penalties if the city lengthens the yellow period,” as Digital Trends reported. Former San Diego mayor Roger Hedgecock testified to Congress that the city of Tempe, Arizona, “did a study which showed that simply increasing the yellow light interval cut photo enforcement citations by 50 percent. But the Lockheed Martin contract prevents the City of Tempe from extending the yellow light interval where Lockheed’s cameras are in place.” The Public Interest Research Group (PIRG), an activist group founded by Ralph Nader, reported that red light camera contracts for several California cities “potentially impose financial penalties on the city if traffic engineers extend the length of the yellow light … which would reduce the number of tickets the systems can issue.” In 2011, the Florida Department of Transportation revised official policy to shorten yellow light intervals. “A half-second reduction in the [yellow]interval can double the number of Red Light Camera citations — and the revenue they create,” an investigation by reporter Noah Pransky of WTSP-TV in Tampa revealed. In 2015, the state of Maryland suspended its mandate that yellow lights need to be at least three and a half seconds. Montgomery County, Maryland, reaped more than $300,000 in tickets after shortening one yellow light at a busy intersection to less than three seconds.

In 2014, Chicago began issuing red light violation tickets for yellow lights shorter than three seconds — the federal minimum safety guideline. The city hit the jackpot, issuing an extra 77,000 tickets and pilfering almost $8 million from drivers’ pockets. A Chicago Tribune investigation “found malfunctioning cameras, inconsistent enforcement and millions of dollars in tickets issued purposely by City Hall even after transportation officials knew that yellow light times were dropping below the federal minimum guidelines.” After the Tribune exposed the city government scheme and after an Inspector General report labeled the red light camera regime “fundamentally deficient,” Mayor Rahm Emanuel announced that the city would cease ticketing people for less-than-three-second yellow lights “because trust is the most important” thing. Three years later, after losing a class-action lawsuit, the city of Chicago grudgingly gave partial refunds to drivers who got shafted. Chicago activist and video camera expert Barnet Fagel said that “red light camera revenue is municipal crack cocaine. They’re hooked on it. They will go down fighting before they give up the revenue from the cameras.”

The biggest cash cows for red light camera companies and local governments are drivers who make right turns on red without coming to a dead stop. A 2001 National Highway Traffic Safety Administration report concluded that zero fatalities occurred nationwide in 1998 “from an accident resulting from a right hand turn on red when the driver yielded to oncoming traffic.” Ron Ely of the Maryland Drivers Alliance wrote in September 2012, “One study showed that an average motorist could drive a billion miles, the distance from Earth to Jupiter and back, before being involved in a deadly accident that resulted from a motorist making a rolling stop on a right-hand turn.” John Townsend, spokesman for AAA Mid-Atlantic, observed, “Ninety percent of the tickets we’re seeing across the country … for running red lights, are actually because the driver made a so-called rolling right turn on red…. These cameras were designed for people who run the red light and barrel through the intersection.” Townsend labeled right-turn-on-red cameras as “the biggest scandal in automated traffic enforcement.” Yet, as the PIRG report noted, “Some contracts require municipalities to strictly issue tickets on all right turns that do not first come to a complete stop, or enable vendors to impose financial penalties on cities that choose to alter their enforcement standards.”