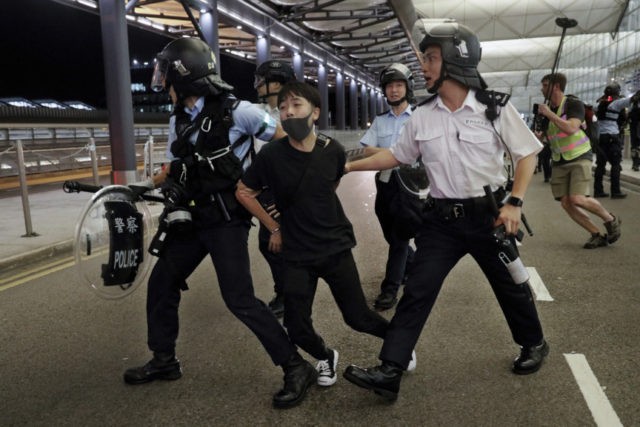 Hong Kong police played rough again on Tuesday, charging into a crowd of student protesters and tackling one teenager with enough force to send him to the hospital.

The incident came as Chinese state media issued another belligerent warning the “traitors” of the protest movement “have no idea of China’s power and will as an emerging country.”

The incident of police violence occurred at Confucian Tai Shing Ho Kwok Pui Chun College (HKPC), where a group of about 60 students and adults gathered on Tuesday morning to demonstrate in support of the Hong Kong “student strike” that began Monday.

The Hong Kong Free Press described police arriving on the scene for no apparent reason and getting physical with the demonstrators:

When the students were about to leave, a few officers charged ahead and one officer tackled a student outside a neighbourhood playground.

Footage shot by Cupid Producer showed the student falling to the ground. He was seen bleeding from his mouth and chin afterwards.

According to Apple Daily, at least four of the students were stopped and searched before being allowed to leave. Paramedics later treated the injured student and took him to the hospital. One officer also reportedly scraped his arm when he fell.

It was unclear why officers were summoned to the scene, though the vice-principal of the school said in a statement they did not call the police.

Police officials claimed officers were summoned to the scene by “noise complaints” and denied tackling the student, insisting the takedown captured on video was merely the student and officer simultaneously slipping and falling on wet ground:

Further controversy was sparked by a leaked audio recording of HKPC principal Leung Chau-wan telling student demonstrators she would report them to government education officials and explaining why they were required to hold their boycott demonstration in the lecture hall instead of a location where they could be more easily seen and heard: