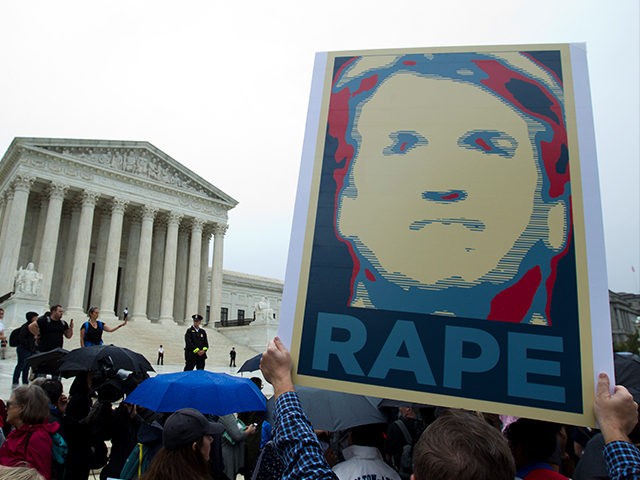 Mansour: Manufacturing a Smear – How the Democrat-Media Complex Turned Brett Kavanaugh into a ‘Rapist’

The day he was sworn in as an associate justice of the Supreme Court, Brett Kavanaugh made history as the first justice to hire an all-female staff of law clerks. This was in keeping with his record of hiring more women than men and of sending more women to clerk on the Supreme Court than any other judge in the country during his 12-year tenure on the federal bench.

The women who clerked for him – including those who identify as liberals—describe him as “a lifelong mentor who feels an enduring responsibility for each of his clerks,” “an extraordinarily thoughtful man, who goes out of his way to be kind” and whose “hiring and support of women alone has helped to really diversify the range of Supreme Court clerks.”

So how did a man who is a proven ally of women, who is universally praised by female colleagues and has never had any complaints lodged against him over his decades-long career, come to be labeled a “rapist,” and those who voted to confirm him to the Supreme Court as “rape enablers”?

It took a mix of political activism, uncorroborated allegations, and left-wing hysteria – all woven seamlessly into a media narrative blasted 24/7 to drown out the truth and transform a good man into a monster.

He called this the Democrat-Media Complex. It’s what turned Brett Kavanaugh into a “rapist.”

But don’t take my word for it. Let’s review the evidence.

In November 2018, the Senate Judiciary Committee released a 414-page report of its investigation into the sexual misconduct allegations lodged against Kavanaugh during his confirmation process. The report explained—in painstaking detail—that neither the committee’s investigation nor the FBI’s background investigation could find “any evidence to substantiate or corroborate any of the allegations.”

Opposing the Nomination of “XX”

From the moment President Trump named Kavanaugh to replace Justice Anthony Kennedy on the Supreme Court, the left rallied to oppose him at all costs. It wasn’t personal. It was about abortion. They opposed him—just as they oppose every Republican judicial nominee—because they feared he might someday vote to overturn Roe v. Wade.

On the evening of July 9, 2018, after Trump announced Kavanaugh’s name, Senate Minority Leader Chuck Schumer (D-NY) vowed to oppose his nomination “with everything I have.”

Sen. Kamala Harris (D-CA) announced her opposition by calling Kavanaugh “a fundamental threat to the promise of equality” whose nomination would be the “destruction of the Constitution of the United States.”

“The nomination of Judge Brett Kavanaugh will threaten the lives of millions of Americans for decades to come,” former Virginia governor Terry McAuliffe tweeted.