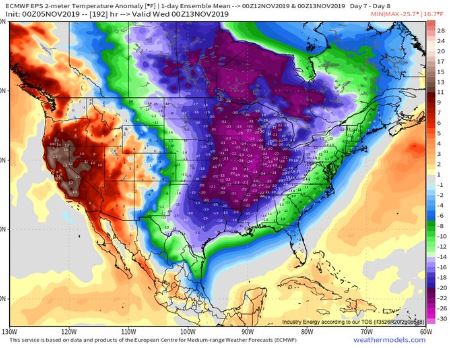 Earlier this week, Ed Vallee, head meteorologist at Empire Weather, said several blasts of Arctic air would roll into the Mid-Atlantic and Northeast regions this week and early next week.

The first round of cold air has arrived, and it’s absolutely freezing in the Northeast.

Vallee said the first round of cold air is an appetizer for what’s to come early next week. He noted in his forecast below that, temperatures across the Midwest and Northeast could be on “average 20-30°F below normal.”

“A very cold air mass will penetrate the Midwest and Northeast U.S. into early next week. As a strong cold front moves through the Plains and Midwest Monday into Tuesday, temperatures will average 20-30°F below normal, leading to potential record cold high temperatures only in the 10s and 20s.

The second wave of Arctic air is expected to move through the northern Plains and upper Midwest Sunday, into the southern Plains and Ohio Valley Monday, then into the East Coast by Tuesday.