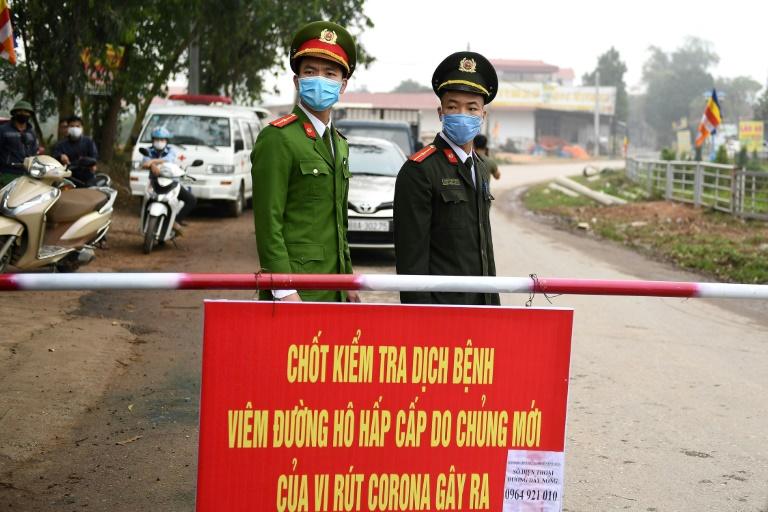 Vietnamese police stand guard at a checkpoint set up at the Son Loi commune in Vinh Phuc province amid concerns about a Covid-19 coronavirus outbreak.
English

By TDO on 02/13/2020 0 Comments
Vietnamese police stand guard at a checkpoint set up at the Son Loi commune in Vinh Phuc province amid concerns about a Covid-19 coronavirus outbreak.

For most of the past decade, Vietnam had benefited from China’s rising standard of living, higher wages, as companies seeking the lowest cost producer quietly but firmly transferred supply chains to originate out of China and into lower-cost locales such as Vietnam, whose devaluing currency (aptly named the dong) only helped boosting exports. Which is why it is painfully ironic that the same nation that indirectly helped Vietnam become a prominent player in global trade, now appears set to cripple Vietnam’s fledgling export powerhouse. The culprit? Covid-19.

With China’s economy grinding to a halt as tens of thousands of people are infected and hundreds of millions are under quarantine from the coronavirus pandemic, a new viral hub may be emerging near Vietnam’s capital, Hanoi.

According to the Bangkok Post, villages in Vietnam with 10,000 people close to the nation’s capital were placed under quarantine on Thursday after six cases of the deadly new coronavirus were discovered there, authorities said.

The locking down of the commune of Son Loi, about 40 kilometres from Hanoi, is the first mass quarantine outside of China since the virus emerged from Wuhan.

“As of February 13, 2020, we will urgently implement the task of isolation and quarantine of the epidemic area in Son Loi commune,” said a health ministry statement. “The timeline… is for 20 days”.

Vietnamese police stand guard at a checkpoint set up at the Son Loi commune in Vinh Phuc province amid concerns about a Covid-19 coronavirus outbreak.

The health ministry previously said five people in Son Loi – which is a farming region made up of several villages – had been infected with the virus, and on Thursday reported a sixth case. At that time, checkpoints were set up around the commune, in Binh Xuyen, a district on the outskirts of Son Loi, according to AFP reporters .

Even ahead of the quarantine, local resident Tran Van Minh told AFP that authorities had already advised residents to avoid large gatherings. “Life has been badly affected,” he told AFP by phone, adding that much of the labor force is reliant on jobs in construction and house painting.

“Now we cannot get out and even if we do, clients don’t welcome us that much as before.”

If this is a harbinger of things to come, very soon all of Vietnam may be under lockdown. Recall that China has imposed unprecedented quarantines across Hubei and the entire country, locking in several hundred million people, in a bid to stop it spreading. Tens of millions of residents in cities far from the epicentre are also enduring travel restrictions.

The virus has also had massive ramifications globally, with many countries banning travellers from China in a bid to stop people spreading the disease.

Vietnam, which shares a porous border with China, has 16 confirmed cases of the coronavirus, including those in Son Loi.

In a bid to stop the virus from spreading, Vietnam had banned all flights to and from mainland China and has also suspended new tourist visas for Chinese nationals or foreigners who had been in China over the past two weeks. It remains to be seen if it will be enough.