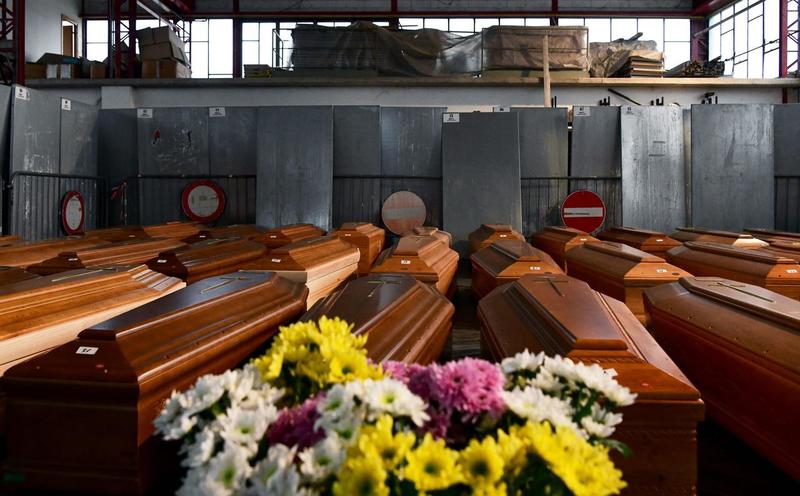 The EU’s Betrayal Of Italy May Be Its Undoing

Authored by Francesco Giubilei via TheAmericanConservative.com,

When countries are turning to China because their supranational institutions won’t help, that’s a problem…

The COVID-19 pandemic has taken a greater toll on Italy than any other nation. The Italians are facing their most severe crisis since the Second World War, with Lombardy in the industrial north particularly hard hit. Yet for all its rhetoric about global citizenship and solidarity, the European Union has all but abandoned them.

That’s even though communist China, arguably globalization’s greatest and shrewdest state beneficiary, is ready to fill the void and help Italy put out the fire its own virus started.

The coronavirus first appeared in Italy on January 31 when two Chinese tourists from the Hubei province tested positive in Rome, eight days after they’d landed at the Milan airport in Lombardy. The two were immediately isolated and quarantined in the Roman Spallanzani hospital, and the situation seemed under control—until February 21. That day, Italy confirmed 16 new coronavirus cases, 14 in Lombardy and two in Veneto. A 38-year-old Italian from Codogno near Milan with acute respiratory symptoms was identified as patient zero. Despite Italy’s attempts to contain the virus by locking down the city of Codogno, coronavirus infections spread.

In just a few days, Italy had the highest number of infections in Europe, with Lombardy as the pandemic’s epicenter. To avoid the spread of infections to the rest of Italy, the government locked down the entire region of Lombardy and other areas in northern Italy, effectively quarantining 17 million people. A few days later, as the situation deteriorated, the whole of Italy was declared an “orange zone”—all “non-essential” commercial activities were shut down and the free movement of citizens was limited to grocery and pharmaceutical shopping and work obligations deemed by the state as of “prime importance.”

The economic repercussions of a complete shutdown loomed large. Consequently, Italy asked the EU for more flexibility on its accounts and requested that emergency measures be deployed to support Italian citizens and businesses. At the time, the crisis was hardly felt in the European powerhouses, France or Germany. The EU’s response was slow and inefficient, and Italians started to feel abandoned by European institutions. As the original signer of the Treaty of Rome, Italy is a founding member of the EU and the third largest economy in the eurozone.

On March 12, the president of the European Central Bank (ECB), Christine Lagarde, marked a point of no return—she gave a highly anticipated speech outlining the measures the bank would introduce to combat the effects of the coronavirus. Lagarde decided not to cut interest rates, arguing against the policy of “whatever it takes,” as had been outlined by former ECB president Mario Draghi. To Italians, the EU’s indifference was a betrayal. The consequences of her words were immediate—and disastrous for Italian stocks. Even the pro-EU president of the Italian Republic, Sergio Mattarella, released a harsh statement asking the EU to correct its ways in the “common interest” of Europe.

The EU did change its position on the COVID-19 response, but not until the health care crisis had spread to France and Germany, making it their problem, too. By then, the damage done to the Italians’ trust in European institutions was already beyond repair. With few viable options left, Italy’s government is now considering the European “Save the State Funds,” asking the EU to implement the €500 billion emergency bailout program from the European Stability Mechanism designed for EU member states—a risky move that may saddle Italy with long-term debt on a scale similar to Greece.

The coronavirus emergency has exposed the failures and flaws of the European Union, while underscoring the importance of nation-states. In Europe, we’ve observed a series of events that have demonstrated the collapse of the supra-national model. First, the borders shut down—Austria and Slovenia acted unilaterally, without asking approval from Italy’s government. The move was also symbolic: Italy was not only isolated, it was abandoned to its own devices.

Globalization may have its efficiencies, but an overwhelmed health care system suffers in the absence of internal production of the necessary materials—life-saving ventilators, infection-preventing hazmat vests, face masks. The global evolution of supply chains exported manufacturing and relied heavily on the cheap imports of essential products from abroad. But with the spread of the coronavirus, many states are now forbidding the export of medical equipment. A good example is Turkey, a country that readily accepts EU funds and that many liberals would like to bring into the Union. Ankara blocked a shipment of 200,000 face masks already purchased by Italy for the hard-hit northern regions of Marche and Emilia Romagna.