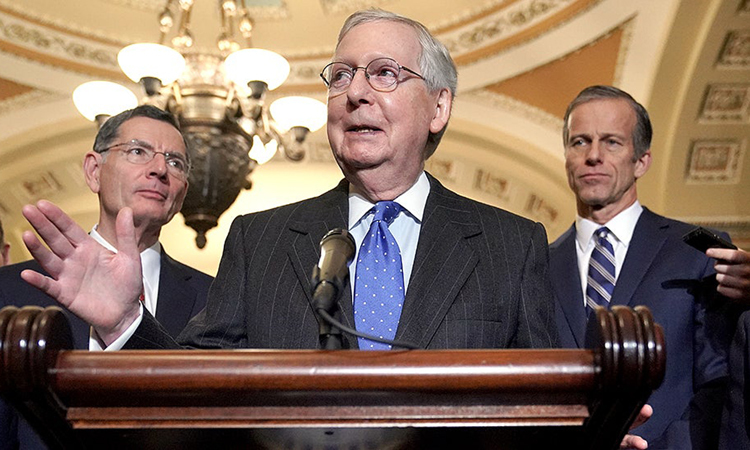 McConnell on Senate ‘Obamagate’ Inquiry: After Impeachment, Pelosi Is Not in a Position to Lecture Us on ‘Appropriate Use of Time’

Thursday on Fox News Channel’s “The Story,” Senate Majority Leader Mitch McConnell (R-KY) responded to criticism from his House of Representatives counterpart Speaker Nancy Pelosi regarding the House Homeland Security Committee’s use of subpoena power in the lead-up to the 2017 investigation of alleged Russian interference in the 2016 presidential election.

McConnell dismissed Pelosi’s comments given the length of time the House spent on impeachment under her leadership.

“I’d say to the speaker, after the impeachment, you — you’re not in a position to be lecturing us about what the appropriate use of Senate time is,” he said. “The House of Representatives is arguing before the Supreme Court that they’re still looking at yet another impeachment. They’re arguing that before the Supreme Court this week. Look, this is the legitimate oversight responsibility of the Senate.”

“There was a lot of apparent misbehavior going on in the opening of those investigations into General Flynn and others,” McConnell continued. “And so Ron Johnson, the head of Homeland Security, has got subpoenas out for Hunter Biden. Lindsey Graham, the chairman of the Judiciary Committee, has laid out a series of hearings and people that he wants to call to come testify. If the House can spend time on a baseless impeachment effort, then we should at least have oversight over what happened to initiate this whole process a couple of years ago.”