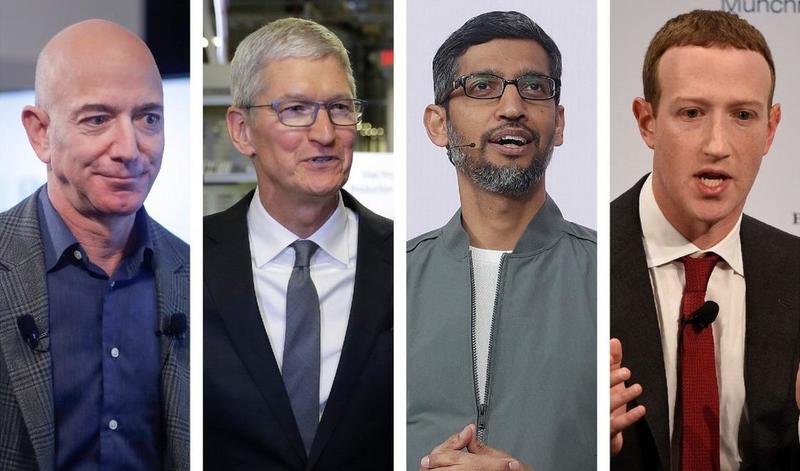 Big tech CEOs took a beating from both sides on Wednesday, with Democrats on the House Judiciary antitrust subcommittee hammering the heads of Facebook, Amazon, Google and Apple over anti-competitive conduct, and Republicans on the committee focusing on bias against conservatives.

Representative David Cicilline, the chairman of the antitrust subcommittee, grilled Sundar Pichai, Google’s chief executive, about how Google steers traffic to its own search pages and products. Representative Jerrold Nadler of New York asked Mark Zuckerberg, Facebook’s top executive, about emails he wrote describing Instagram as a potentially disruptive competitor before the company acquired the firm. And Representative Hank Johnson of Georgia pushed Tim Cook of Apple on whether his company exerts unfair dominance over app developers in its app store. –NYT

Wrapping up the five-plus hour session, Chairman Rep. David Cicilline (D-RI) said during his closing statements that all four companies are monopolies, saying “These companies, as they exist today, all have monopoly power,” adding “Some need to be broken up” and “heavily regulated.”

“Their control of the marketplace allows them to do whatever it takes to crush independent businesses and expand their own power,” Cicilline added.

“They’re engaged in behavior that’s anticompetitive, which favors their own products and services, which monetizes and weaponizes data, which compromises the privacy of their users and which creates a competitive disadvantage for companies attempting to enter the marketplace.”

Representative David Cicilline said the House antitrust subcommittee had observed ‘common patterns and competition problems’ at four of America's largest tech firms during a congressional hearing in which the CEOs of those companies testified https://t.co/0UwEkKbcS2 pic.twitter.com/QmJhf3lgHZ

Jordan accused the companies of being “out to get conservatives.”

“I’ll just cut to the chase,” said Jordan during opening remarks. “Big Tech is out to get conservatives. That’s not a suspicion, that’s not a hunch — that’s a fact.”

“We’re 97 days before an election, and the power … these companies have to impact what happens during an election, what American citizens get to see before their voting, is pretty darn important,” said Jordan.

Later in the hearing, Jordan dug into Pichai, repeatedly demanding assurances that Google would not tip the scales for the Democrats in November.

“Can you assure Americans today you won’t tailor your features to help Joe Biden in the upcoming election?” asked Jordan, who mentioned reports of a “silent donation” the company made to the Clinton campaign in the 2016 election cycle.

Jordan had to repeat the question several times during his allotted five minutes before Pichai finally uttered, “You have my commitment.”

Jordan’s grievances notwithstanding, lawmakers on both sides of the aisle were united in holding the tech titans’ feet to the fire, amid bipartisan concerns that they’ve developed a stranglehold on the internet and American life. –NY Post

Rep. @Jim_Jordan: "Is Google going to tailor its features to help Joe Biden in the 2020 election?"

The CEOs defended their businesses, with Bezos arguing that ” Every day, Amazon competes against large, established players like Target, Costco, Kroger and, of course, Walmart — a company more than twice Amazon’s size.”

Mark Zuckerberg painted Facebook as an “American success story” and an underdog compared to his competitors.

Rep. Pramila Jayapal rejected Zuck’s framing, firing back “When the dominant platform threatens its potential rivals, that should not be a normal business practice.”

“Facebook is a case study, in my opinion, in monopoly power, because your company harvests and monetizes our data, and then your company uses that data to spy on competitors and to copy, acquire and kill rivals. Facebook’s very model makes it impossible for new companies to flourish separately, and that harms our democracy, it harms mom-and-pop businesses and it harms consumers.”

Tim Cook defended Apple’s App Store amid accusations that the company has unfairly blocked apps which rival its in-house products, along with the 30% cut the company takes from in-store purchases.

“I’m here today because scrutiny is reasonable and appropriate,” he said, adding “If Apple is a gatekeeper, what we’ve done is open the gate wider.”

But, as the Post explains, “It was the frequently evasive Pichai, however — defending Google’s far-reaching online ad business — who seemed to catch most of the flak.”

Cicilline charged that Google has “evolved from a turnstile to the rest of the Web, to a walled garden that increasingly keeps users within its sites.

“It used its surveillance over Web traffic to identify competitive threats and crush them,” continued Cicilline. “It has dampened innovation and business growth … virtually ensuring that any business that wants to be found on the Web paid Google a tax.” –NY Post

“Our founders would not bow before a king,” said Cicilline. “Nor should we bow before the emperors of the online economy.”

Wow, Bezos says the most common reason to buy a company is "Market position." That's the whole ball game.

While the tech titans mostly stuck to their prepared remarks at the beginning of today’s testimony, Facebook’s Mark Zuckerberg veered off script – pointing out that Google is the largest online advertising platform in the world, while Amazon is growing the fastest.

“In many areas, we are behind our competitors,” he said. “The most popular messaging service in the U.S. is iMessage. The fastest growing app is TikTok. The most popular app for video is YouTube. The fastest growing ads platform is Amazon. The largest ads platform is Google. And for every dollar spent on advertising in the U.S., less than ten cents is spent with us.”

Translation: Facebook couldn’t possibly commit antitrust violations with these advertising behemoths at the head of the pack.