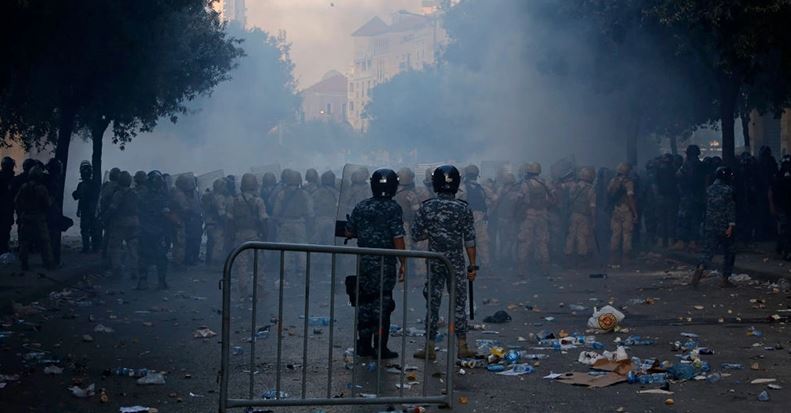 ‘We are at war with our government’: protesters clash with police and the army in Beirut

The groups exchanged tear gas and molotov cocktails as night fell, with the army being drafted in to take control of Martyrs’ Square in the city centre. It is believed one police officer fell to his death following an ‘assault’ by protestors, and dozens of demonstrators are injured.

The blast of the Port of Beirut that ripped through the city – killing 150 people – has been seen as a direct consequence of the incompetence and corruption that have come to define Lebanon’s ruling class.

Around 5,000 people had earlier gathered in the central square to vent their fury at the government. A large deployment of police tried to contain them as they chanted ‘the people want the fall of the regime’, and advanced towards parliament before riot police were deployed.

Cardboard cut outs of militant group Hezbollah’s leader Hassan Nasrallah and Speaker of the Parliament Nabih Berri among others were hung in mock gallows.

‘There is hatred and there is blood between us and our authorities,’ said Najib Farah, a 35-year-old protester in central Beirut. ‘The people want revenge.’

On a street leading to parliament, young men lobbed stones at security forces who replied with tear gas, a familiar sight in Lebanon since last October when the country was crippled by economic crisis.

A few hundred metres down the road, a group of retired Lebanese army officers stormed the foreign ministry in central Beirut and declared it the ‘headquarters of the revolution’.

The takeover, which was aired live on local TV, lasted for three hours before the Lebanese army was brought in to drive the protestors. Footage shows the soldiers violently pushing back the protestors.

The economy and energy ministries and the Association of Banks in Lebanon were also targeted, with protestors storming the economic departments and throwing piles of paperwork out of the windows.