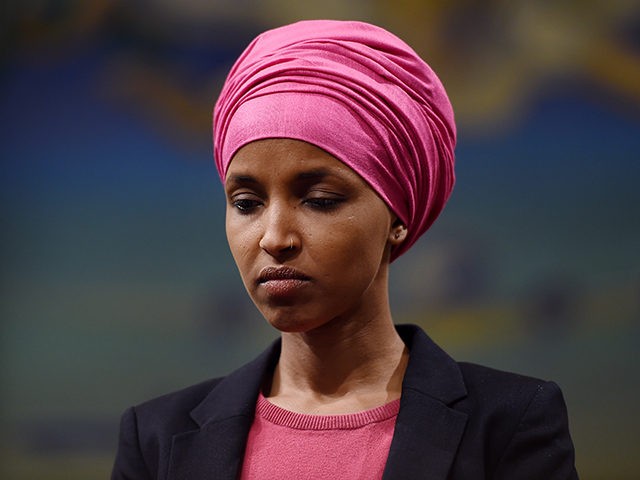 Ilhan Omar: Hate for Me Is ‘Anti-Muslim, Anti-Immigrant, Anti-Black, Sexist’

Rep. Ilhan Omar (D-MN) touted her intersectional oppression in a recent interview with the New York Times, lamenting that she constantly has to “deal with the hate of anti-Muslim, anti-immigrant, anti-blackness, but also with sexism” in the United States.

Omar made the remark when asked about a controversial passage in her autobiographical book — This Is What America Looks Like: My Journey from Refugee to Congresswoman — in which she wrote:  “I am, by nature, a starter of fires. My work has been to figure out where I’m going to burn down everything around me by adding the fuel of my religion, skin color, gender or even tone.”

“Couldn’t that kind of language be interpreted as a form of demagoguery?” the Times asked.

It’s metaphorical. There are many times when people will say, “Something you said has agitated this space.” And it’s like, no, it’s me just showing up that did it. There are times when I will choose to not show up, because I know that my presence brings about intensity that isn’t going to be helpful. There’s no one else that exists in a space where they have to deal with the hate of anti-Muslim, anti-immigrant, anti-blackness, but also with sexism. People will say it’s my “tone.” I’m like, you’re agitated by my tone because you think people like me should be sitting in a corner, not heard and not seen. Everything that comes out of my mouth is going to be filtered through the lens of you despising my existence.

Omar, who was born in Somalia and lived in a refugee camp in Kenya before coming to the U.S. in the 1990s, has previously accused the U.S. of virtually being a fundamentally bigoted country. In March, Omar claimed that American power comes from racism and that “our history is built on the oppression of black bodies.”