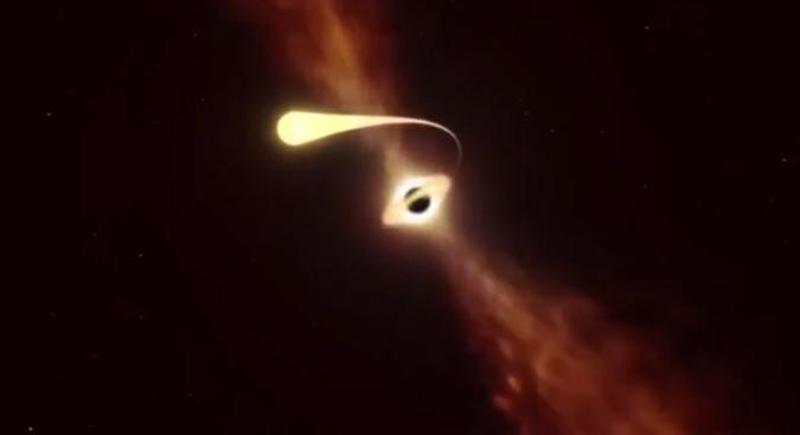 While you were sitting around scratching your ass, watching Seinfeld re-runs and pondering whether or not you should have Chinese food or pizza for dinner, a supermassive black hole was in the process of devouring a star 215 million light years away.

And scientists have published a rendering of exactly how it happened.

On Tuesday, RT posted the moment that astronomers were able to capture the death of a star from what is called a “tidal disruption event”. Astronomers were alerted to the event due to a “intense flash of light” that was visible hundreds of millions of light years away, before a star disappeared into a black hole’s event horizon.

The TDE was discovered in September 2019 and was observed for the next six months. These events are “almost impossible to predict” and are rarely ever witnessed, but for periods of “constant surveillance” of the sky. This event occurred in the constellation of Eridanus and astronomers were able to direct numerous telescopes in that direction once the initial flash was observed.

Thomas Wevers, based at the University of Cambridge, said: “We immediately pointed a suite of ground-based and space telescopes in that direction to see how the light was produced.”

The process is so intense that, at times, it “outshines” its host galaxy before fading into oblivion. Observers said this star was, at one point, roughly the mass of our own sun. The black hole that absorbed it was “a million times more massive”.

The observation provided direct evidence of the outflowing of gas during these events, which had been theorized but never observed. “The black hole launched powerful jets of dust outward at velocities up to 10,000 km/s as it was eating the star,” RT noted.

Astronomer Edo Berger of the Harvard-Smithsonian Center for Astrophysics concluded: “This event is teaching us about the detailed physical processes of accretion and mass ejection from supermassive black holes. [It is a] Rosetta stone for interpreting future TDE observations.”