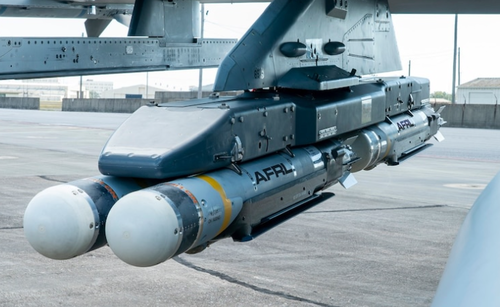 The first-ever test flight of swarming munitions fired from a fighter jet recently ended with partial success, according to the Air Force Research Laboratory (AFRL).

Both CSDBs were able to identify and locate high-value mock enemy targets but there was a problem. The test wasn’t a complete success. Due to “an improper weapon software load, the collaboration guidance commands were not sent to the weapon navigation system,” AFRL said.

Chris Ristich from the AFRL said the swarming munitions demonstration, called Golden Horde, “is an important step on the path to Networked Collaborative Weapon systems, adding that the “completion of this first mission sets the stage for further development and transition to the warfighter.”

The AFRL published a short video of how swarming munitions work.

“Networked collaborative weapons share data, interact, develop and execute coordinated actions or behaviors. They use shared data to improve information across an entire group of weapons – sometimes called a swarm – thereby improving the entire swarm’s effectiveness. When each weapon shares measurements of a target’s location, combining this information reduces errors since it creates a more accurate target location for all to reference. Ultimately, this supports the use of lower-cost sub-systems in place of more expensive systems without sacrificing capability,” the description of the video reads.

If weaponized drone swarms could one day be classified as a “weapon of mass destruction,” – then maybe swarming munitions fired from fighter jets should be labeled the same. Just imagine if these smart munitions had hypersonic capabilities…