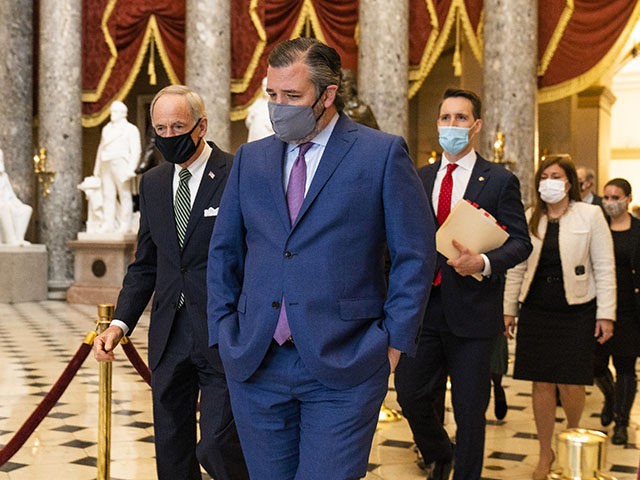 Sen. Sheldon Whitehouse (D-RI) stated on Monday that the Senate Ethics Committee must “consider the expulsion, or censure and punishment, of Senators Cruz, Hawley, and perhaps others” because of the events that unfolded at the U.S. Capitol on January 6.

“The Senate needs to oversee federal investigation of the attack and ransacking of our national Capitol, through the Judiciary and perhaps Homeland Security Committees,” Whitehouse said in a statement, adding that the Senate must “conduct security review of what happened and what went wrong, likely through the Rules, Homeland, and Judiciary Committees”:

Because Congress has protections from the Department of Justice under separation of powers, specifically the Speech and Debate Clause, significant investigation will need to be done in the Senate. Because of massive potential conflict of interest, Senators Cruz, Hawley, and Johnson (at least) need to be off all relevant committees reviewing this matter until the investigation of their role is complete.

Other Democrat senators have called on Cruz and Hawley, both of whom led the way in challenging electoral votes in disputed states, to resign from their posts, blaming them for the chaos at the Capitol. Those senators include Sens. Sherrod Brown (D-OH), Chris Coons (D-DE), and Patty Murray (D-WA).

According to the Hill, “Democratic aides say there is a discussion about censuring the two lawmakers,” accusing them of inciting the protesters who rushed the Capitol on Wednesday:

A Democratic senator would need to sponsor a resolution to censure or expel Hawley or Cruz for there to be a vote on either option. The possibility of a vote on expulsion is seen as much less likely.

“There were a couple of senators trying to figure that out,” said a Senate Democratic aide. “More and more Democratic caucus members are willing to vote yes on a censure resolution.”

However, neither Hawley nor Cruz encouraged or condoned violence at the U.S. Capitol. Rep. Alexandria Ocasio-Cortez (D-NY), who has also blamed President Trump for the protests, said that both Cruz and Hawley should resign or face expulsion from the Senate: