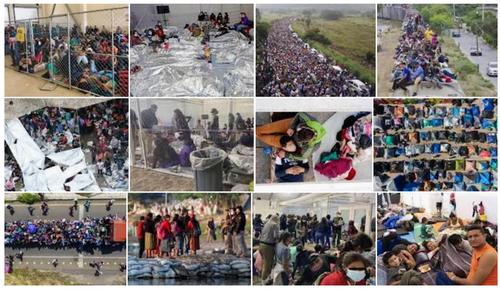 Biden Disapproval Soars As Over 170,000 Illegal Immigrants Flood The US In March, Most In A Decade

Authored by Mike Shedlock via MishTalk,

Biden made a campaign pledge to fix the border with Mexico. Let’s investigate how he’s doing starting with polls then the hard facts.

Only 24% Approve How Biden Is Handling Border Kids

According to an AP NORC Poll few are satisfied with President Biden’s approach to immigration, border security, and particularly toward the recent surge of unaccompanied children at the southern border.

40% disapprove of Biden’s handling of the situation of unaccompanied children at the border and only 24% approve. https://t.co/3vlujxMVPe pic.twitter.com/MpTPwP38MO

Overall, Biden has a 44% approval rating on his handling of the border, heavily skewed towards 74% of Democrats who say they like what he is doing.

That means 74% of Democrats and 44% of people overall are clueless or simply refuse to think.

Politico reports Biden Bets That He Can Change How America Thinks About Migration.

I bet he can’t, especially with millions of US citizens in search of a job. Meanwhile here’s a Q&A

Q: What do politicians do when facing a situation that’s out of control?

A: Blame their predecessor.

In calls with House lawmakers this week, Biden administration officials repeatedly stressed that they inherited a disaster from the Trump administration, and said that the solutions would not be painless or quick. In a separate call with Democratic communications aides on the Hill, White House officials reiterated that the “real crisis is in Central America,” according to several people on the call. Biden and his team are emphasizing the “root causes” of migration surges, and their renewed diplomatic efforts with Central American countries, which lapsed under the Trump administration.

The problem is complex, and Trump did not create it. It’s been ongoing for decades.

Biden did downplay it just as Angela Merkel did with a huge surge of immigrants attempting to escape Mideast wars, especially in Syria.

Biden roundly criticized Trump for sending them back and turning them away.

A: Sending them back and turning them away.

The number of unaccompanied children arriving at the border hit a monthly-high in March, exceeding the last record-high in May of 2019. In total, some 170,000 people were apprehended by border patrol last month. About 100,000 of those migrants were single adults, who have been routinely removed from the U.S. by the Biden administration under a Trump-era public health authority.

There’s also simmering Democratic and activist frustration with Biden’s continued use of the Trump-era authority — known as Title 42 — to expel the majority of people encountered at the border. Publicly and privately, the White House has told reporters and Hill staff that they have no timeline to stop using the authority.

His administration is also racing to expand capacity to humanely house a growing number of child migrants in emergency intake sites — like stadiums, church facilities and summer camps — rather than keep them in tightly-packed border patrol facilities.

Q: What happens to the numbers when the word gets out we are housing and feeding all comers in stadiums?

Q: What the hell do you do when the stadiums fill up?

Q: What happens to Summer camps in the Winter?

In addition to bribing Central American countries and filling up stadiums, Biden put Kamala Harris in charge of the mission.

That brings another question to the forefront: Why did Biden put Harris in charge of the border crisis?