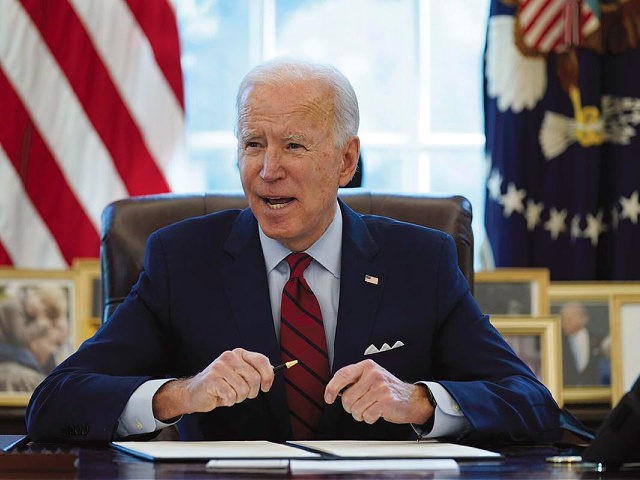 On April 7, 2021, the White House released a fact sheet announcing that President Joe Biden will use  the Department of Justice (DOJ) to publish model red flag “legislation,” address AR-pistols with stabilizer braces, and issue a rule to “stop the proliferation of ‘ghost guns.’”

Breitbart News reported that Biden planned to put forward executive action on gun controls Thursday, and the fact sheet provides an outline detailing what those actions may entail.

According to the White House:

The White House notes that Biden will also have “five federal agencies [make]changes to 26 different programs to direct vital support to community violence intervention programs as quickly as possible.” The White House made clear the agencies are acting where Congress has not: “These changes mean we can start increasing investments in community violence interventions as we wait on Congress to appropriate additional funds.”

The White House explained that the DOJ will also begin “[issuing]an annual report on firearms trafficking.” One of the goals of the report will be to guide “policymakers” in crafting new regulations (and laws) to institute over time.

The Bureau of Alcohol, Tobacco, Firearms and Explosives (ATF) pushed to recategorize AR-pistols with stabilizer braces in late 2020 then abandoned the effort amid public outcry.

On December 23, 2020, Breitbart News reported that the ATF withdrew their recategorization guidelines, but Biden’s push to have the DOJ refocus on AR-pistols appears to mean the recategorization push is receiving new life.

The purchase of AR-pistols categorized as “short-barreled rifles” could require being fingerprinted and photographed, as well as undergoing a background check, registering the firearm with the ATF, paying the federal government a $200 tax (on top of the price of the firearm), and waiting nine to ten months for the whole purchasing process to be completed. That is the standard process for other firearms and accessories under the purview of the National Firearms Act.