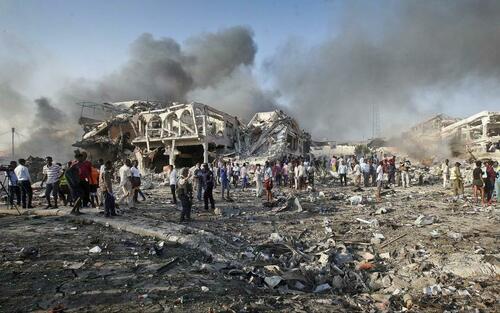 Aftermath of alleged US airstrike in Somalia in prior years, file image.
English

By TDO on 05/16/2022 0 Comments
Aftermath of alleged US airstrike in Somalia in prior years, file image.

White House officials have announced that President Biden will reverse Trump’s Somalia withdrawal of US forces as the fight with al-Shabaab Islamic militants heats up. This includes talk of a return to a policy of indefinite “boots on the ground” – or as one senior official was quoted as saying – “a persistent US military presence” there.

“President Biden has approved a request from the Secretary of Defense to reestablish a persistent U.S. military presence in Somalia to enable a more effective fight against al-Shabaab, which has increased in strength and poses a heightened threat,” a senior admin official said to The Hill Monday.

“This is a repositioning of forces already in theater who have travelled in and out of Somalia on an episodic basis since the previous administration made the decision to withdraw in January 2021,” the official added.

Further The New York Times has also confirmed that “Biden secretly signed an order in early May authorizing the military to redeploy 100s of Special Forces into Somalia and to target about a dozen Al Shabab leaders” underscoring too that it’s reversal of a “last minute” Trump policy that went into effect within that last two months of his administration. The report said additionally that likely no more than 450 troops would be deployed.

Upon Trump’s ordered December 2020 withdrawal of US troops from Somalia, there had been an estimated 700 there in support of counterterror operations. The country has suffered from decades of intermittent civil war, and running conflicts between competing warlords.

Over the past three decades the war-torn country in the Horn of Africa only sporadically hits the news when things go horribly wrong, such as with major pirate attacks on tankers in the Gulf of Aden, or the November 2020 death of a CIA officer reportedly during a raid on a suspected al-Shabaab bomb-maker, and then there’s the disastrous ‘Black Hawk Down’ 1993 mission wherein 18 American soldiers were killed.

US intelligence officials have in the past months been vocalizing their concerns that the terrorist organization al-Shabaab is spreading due to their being no significant military pressure on them. In recent years the Pentagon has established dozens or even perhaps hundreds of small forward operating bases across the African continent, ostensibly as part of broadly defined ‘counterterror’ support given to allied host nations.

If you had told me when I was a teenager, full of rage towards the Republican party for what they were doing to Iraq and Afghanistan, that it would be the Democrats who started most of the wars in my lifetime, I would have laughed in your face. https://t.co/FJJRLCqZeH

Critics, however, have denounced the rapid growth of AFRICOM as part of continued post-9/11 ‘imperialist’ US expansion, pointing also to US-NATO military intervention in Libya against Gaddafi as part of regime change operations, and as a new “scramble” for influence over the continent in competition with China grows, and even to a lesser degree towards thwarting a growing Russian presence in unstable countries like Mali. Are we witnessing the return to a (failed) Global War on Terror (GWOT) posture across the Mideast/North Africa region under the Democratic administration? It appears so.