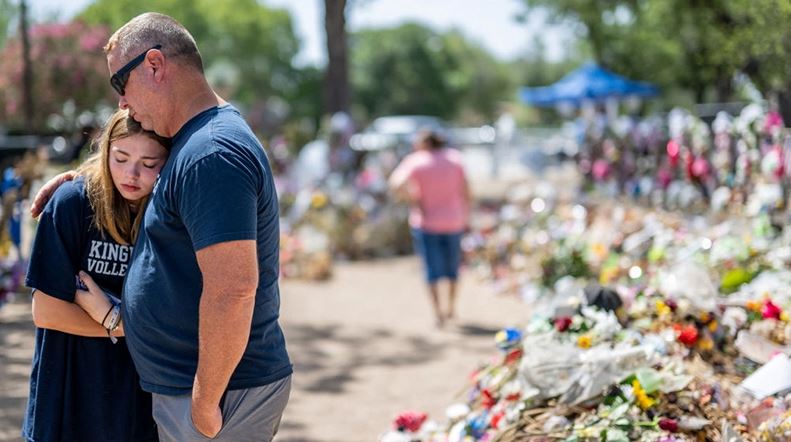 21 people, including 19 children aged nine to eleven, were murdered by a mentally unstable 18-year-old at the Robb Elementary School in Uvalde, Texas on May 24.

The brutality of the incident, and conflicting and contradictory reports on the fumbled the police response, sparked outrage in the Lone Star State and across the country.

Uvalde officials’ use of a legal loophole to avoid releasing police records, including footage from officers’ body cams, 911 calls from students, emails, criminal records and other information has sparked concerns from Texans and others that authorities are engaged in a cover-up.

On Monday, the Austin American-Statesman and Austin KVUE-TV revealed, citing documents and security footage, that officers with high-powered weapons and at least one ballistic shield reached Robb Elementary within 19 minutes of the gunman’s arrival on the scene – challenging earlier accounts by police officials about their response time and the resources they had at their disposal.

On Tuesday, Steve McCraw, director of the Texas Department of Public Safety, said in Senate testimony that the police had enough body armor-equipped officers to “isolate, distract and neutralize” the gunman just three minutes after he entered the school, but instead waited in the hallway for nearly an hour as he carried out his attack.

“There is compelling evidence that the law enforcement response to the attack at Robb Elementary was an abject failure, and antithetical to everything we’ve learned over the last two decades since the Columbine Massacre,” McCraw said, blaming on-scene commander Pete Arredondo for putting armed officers’ lives above those of unarmed children.

The revelations have sparked new questions among parents of the victims and members of the public about why police didn’t confront or try to neutralize the gunman, 18-year-old Salvador Ramos, who was killed by a tactical team unit nearly 80 minutes after he arrived at the school and began shooting.

Last week, the San Antonio Express-News reported that the school’s security cam footage showed that officers did not even attempt to open the door to the classrooms where Ramos was situated.

However, apart from security cam still images shown by KVUE-TV, the media and the public have not been given access to or allowed to share other footage and data, with the Texas Tribune and ProPublica, a New York-based investigative journalism nonprofit, saying none of the roughly 70 public information requests they submitted over the past month have been granted.

Last week, Vice reported that Uvalde’s city administration and police department had hired a law firm to stop the potentially “highly embarrassing” records from being released.On Monday, the release of a clip showing a fire marshal asking reporters to leave Uvalde City Hall during a hearing between city officials and officers responding to the shooting sparked claims of a cover-up, with the hashtag #UvaldeCoverUp trending on Twitter for two straight days.