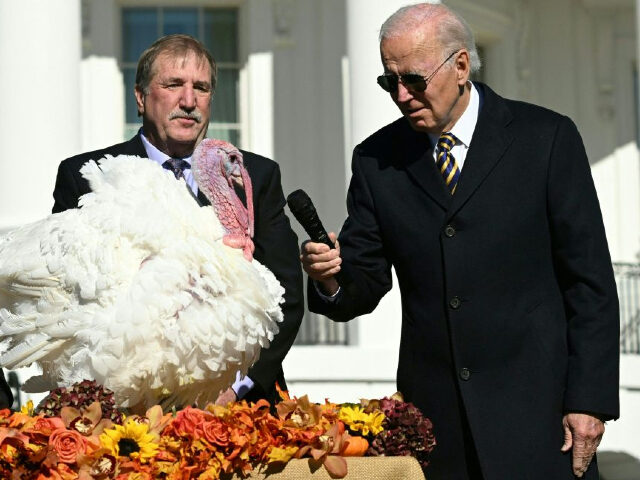 The two turkeys were named “Chocolate” and “Chip,” prompting the president to talk about ice cream.

“Of course, Chocolate is my favorite ice cream,” he said after talking about the turkeys.

He spoke briefly and moved over to the two turkeys pardoning them immediately.

“I hereby pardon Chocolate and Chip,” Biden said before the turkeys could be put on the table for the official pardon.

“Based on their temperament and commitment to being productive members of society, I hereby pardon Chocolate and Chip.” pic.twitter.com/5hFVfOdP1g

After one of the turkeys was put on the table, Biden stood for a while petting them and tried to speak for them.

“He says, ‘You had to tell me that?’” He said after pardoning the turkey again. “Yeah, yeah you are. Yeah, I’m serious.”

“He says, ‘I don’t know man, you didn’t have to pardon me, I knew I was pardoned,” Biden continued.

He marveled at the size of the turkeys and talked about his home state.

“We have more chickens than anybody in the nation in Delaware, but we don’t have turkeys,” he said. The president also asked the two turkey handlers how many turkeys they raised per year.

“Nine and a half million turkeys, I tell you what, that’s like some of the countries I’ve been to,” Biden said before pausing and sticking the microphone in the turkey’s direction.