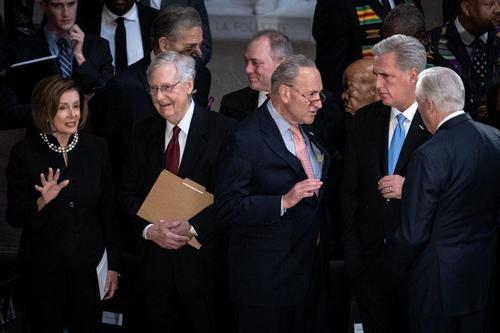 Johnstone: Violent Extremists Took Over The US Capitol Long Before January 6

No longer content with absurd claims that the January 6 Capitol riot was as bad as the 9/11 attacks, Democratic Party-aligned pundits are now insisting that it was in fact worse.

On a recent appearance with MSNBC’s ReidOut with Joy Reid, former Bush strategist Matthew Dowd said he felt the Capitol riot was “much worse” than 9/11 and that this is the “most perilous point in time” since the beginning of the American Civil War.

“To me, though there was less loss of life on January 6, January 6 was worse than 9/11, because it’s continued to rip our country apart and get permission for people to pursue autocratic means, and so I think we’re in a much worse place than we’ve been,” Dowd said. “I think we’re in the most perilous point in time since 1861 in the advent of the Civil War.”

This is absolutely BONKERS and offensive to the thousands murdered on 9/11.

Appearing alongside MSNBC’s Joy Reid, Matt Dowd says “January 6th was worse than 9/11 because it’s continued to rip our country apart and give permission for people to pursue autocratic means” pic.twitter.com/UnJfAID5SN

Not to be outdone, Lincoln Project co-founder Steve Smith cited Dowd’s hysterical claim but adding that not only was January 6 worse than 9/11, but it was actually going to kill more Americans somehow, even counting all those killed in the US wars which ensued from the 9/11 attacks.

“He couldn’t be more right,” Schmidt said at a town hall for the Lincoln Project.

“The 1/6 attack for the future of the country was a profoundly more dangerous event than the 9/11 attacks. And in the end, the 1/6 attacks are likely to kill a lot more Americans than were killed in the 9/11 attacks, which will include the casualties of the wars that lasted 20 years following.”

A total of 2,996 Americans were killed in the 9/11 attacks, and a further seven thousand US troops have been killed in Iraq and Afghanistan. Exactly one person was killed in the January 6 riot, and it was a rioter shot by police inside the Capitol Building. Early reports that rioters had beaten a police officer to death with a fire extinguisher turned out to have been false.

These bizarre alternate-reality takes are awful for a whole host of reasons, including the fact that this so-called “insurrection” everyone is still shrieking about never at any point in its planning or enactment had a higher than zero percent chance of overthrowing the most powerful government in the world, and the fact that they are manufacturing consent for new authoritarian measures just like 9/11 did.