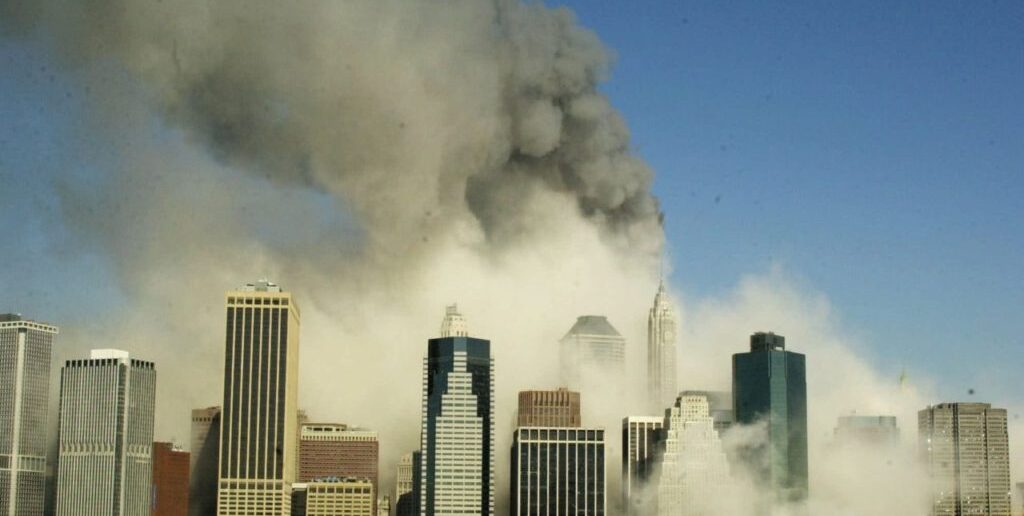 The whole world experienced the attacks of September 11, 2001, in real time. Videos, photos, and audio captured the horror inflicted by Islamic terrorists and the heroism displayed by ordinary Americans forced onto the frontlines of a sudden new war.

To mark the 20th anniversary of 9/11 and to ensure that future generations never forget, Breitbart News offers this visual chronicle of the day that changed the world forever and the 20 years of war that followed.

From the time of its opening in 1973 to that fatal day in September 2001, the Twin Towers of the World Trade Center dominated the skyline of Lower Manhattan’s Financial District, as seen in the following photograph taken just six days before the Towers fell. 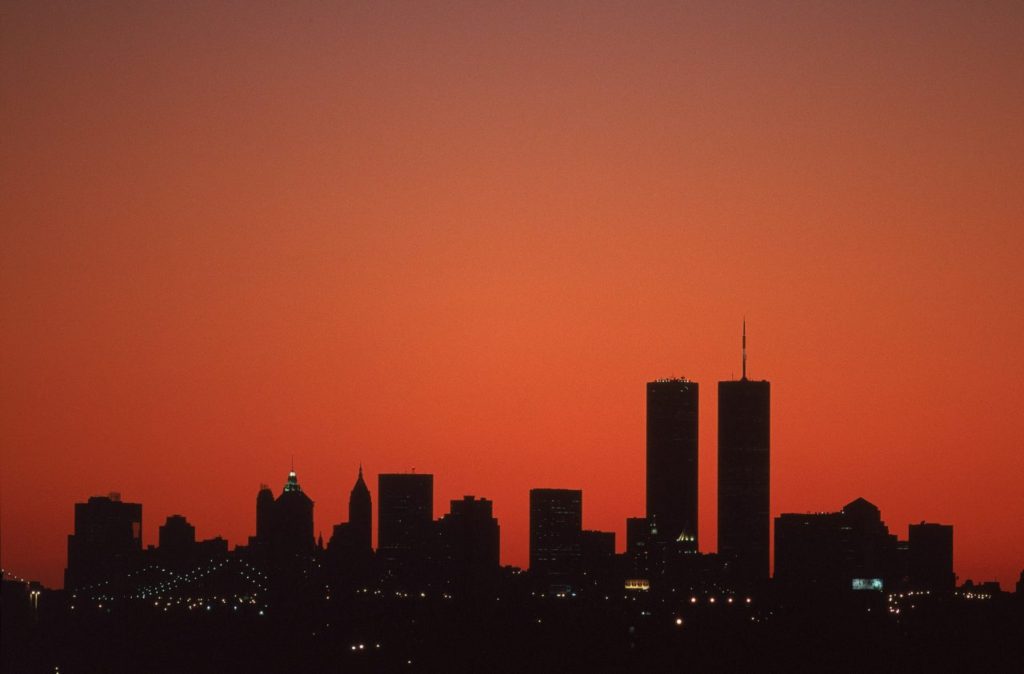 Designed by Detroit architect Minoru Yamasaki, the Twin Towers were famously disparaged by New York Times’ architectural critic Ada Louise Huxtable, who offered this eerie and unintentionally prescient prediction in 1966: “The trade center towers could be the start of a new skyscraper age or the biggest tombstones in the world.”

Those words were long forgotten on that bright September morning before death rained down from cloudless skies. 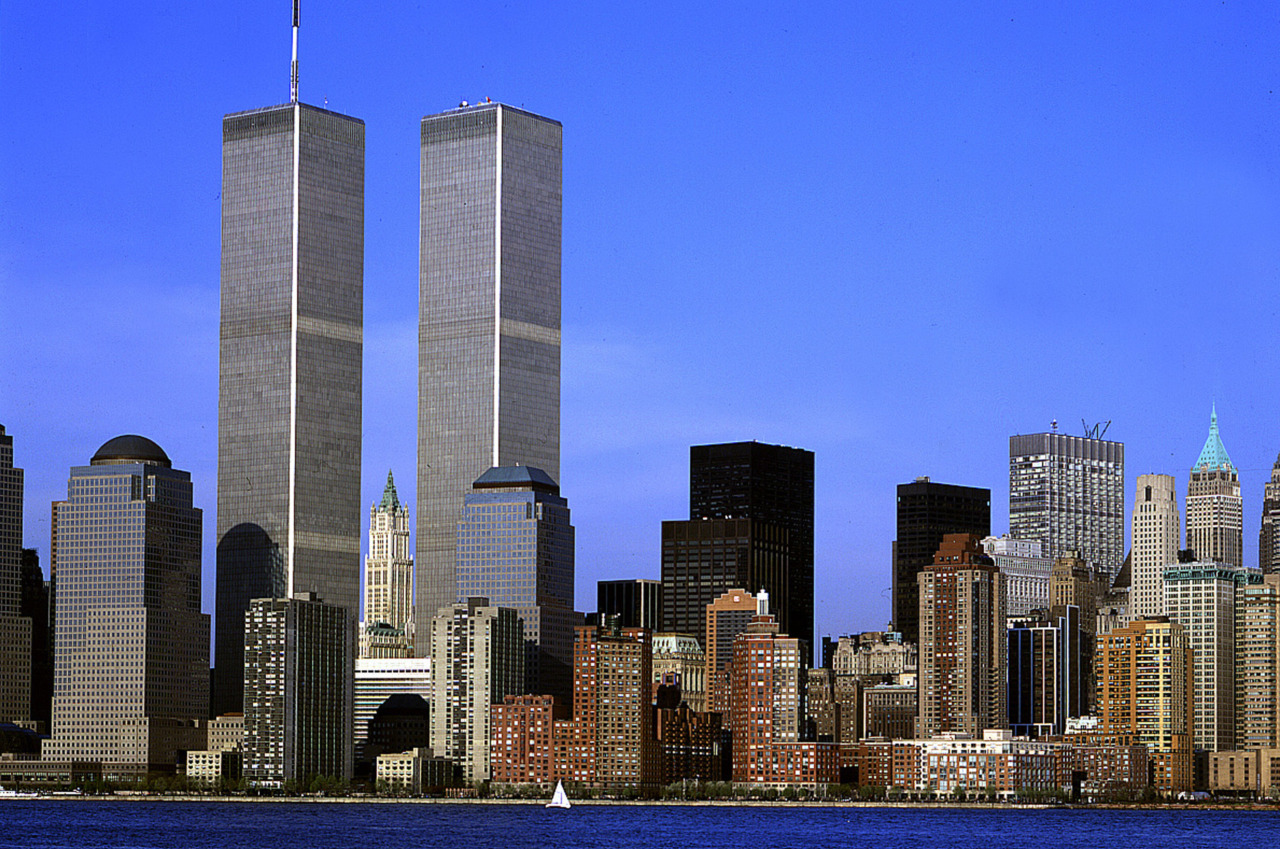 A view from the Hudson River of Lower Manhattan’s Financial District, including the World Trade Center’s Twin Towers. (Getty Images)

Betty Ong, 45, a flight attendant aboard American Airlines Flight 11, was the first person to notify authorities that a plane had been hijacked and that two of her colleagues and a first class passenger had been stabbed.

Ong and her fellow flight attendant Madeline Amy Sweeney, 35, stayed on the phone with authorities until the very end, both calmly providing crucial information that confirmed the identities of the Islamic hijackers.

Among her last words, Ong reportedly said over and over again, “Pray for us. Pray for us.”

The audio of Ong’s call to the American Airlines emergency number was included in a montage released by the Transportation Security Administration (TSA) in 2018.

The following video captured the moment of impact when the hijackers flew American Airlines Flight 11 into the World Trade Center’s North Tower (1 WTC) at 8:46 a.m.

The first images of the burning North Tower flashed across television screens.

Four minutes after the first plane hit the World Trade Center, Christopher Hanley, 35, called 911 from the 106th floor of the North Tower, where he was attending a conference at the restaurant Windows on the World that morning.

The world then watched in horror as hijackers flew a second plane, United Airlines Flight 175, into the South Tower of the World Trade Center (2 WTC) at 9:03 a.m.

The second plane removed any doubt that this was a terror attack, not pilot error. America was indeed at war.

This video shows the ABC News coverage the moment the second plane struck: 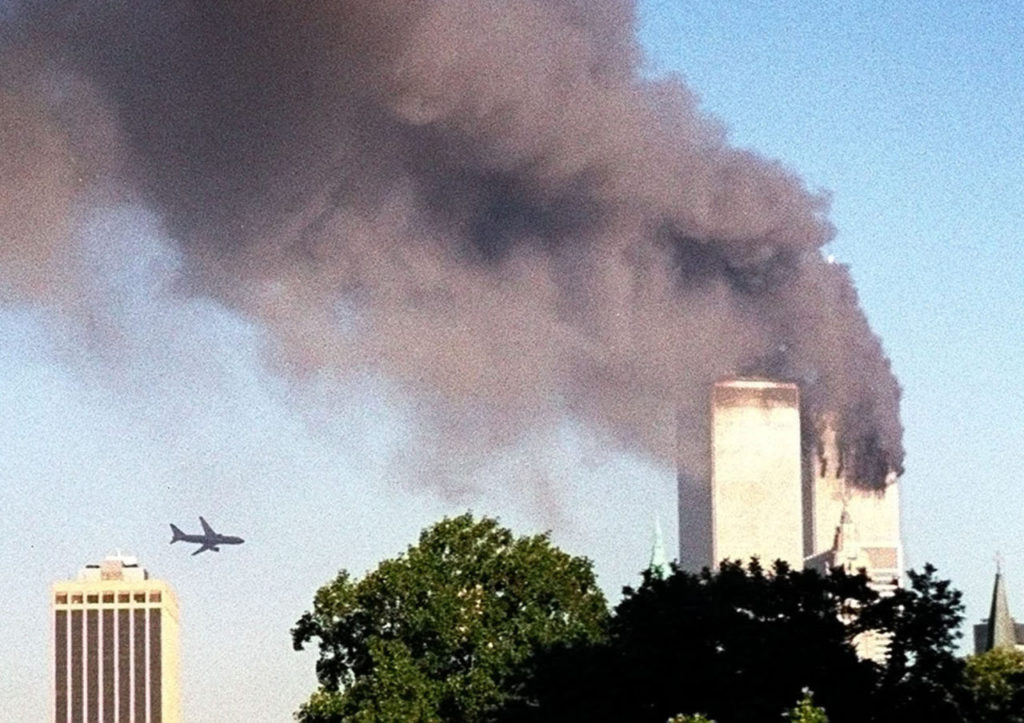 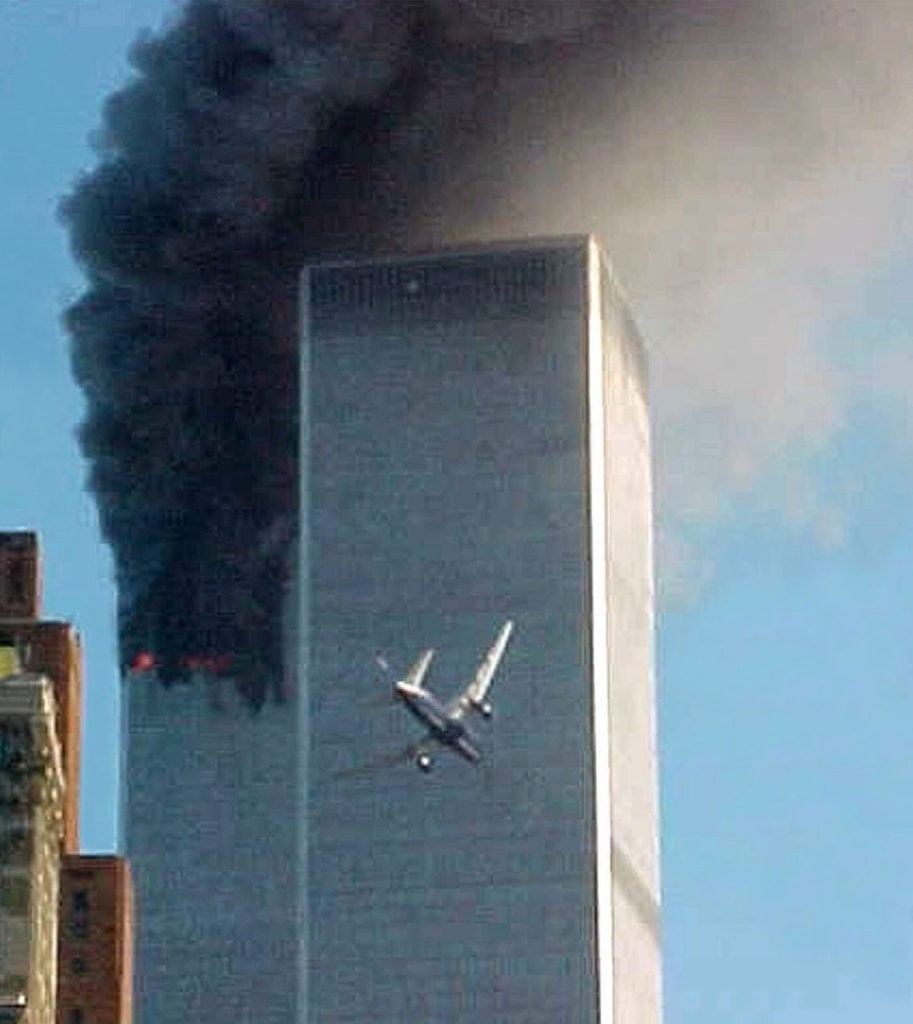 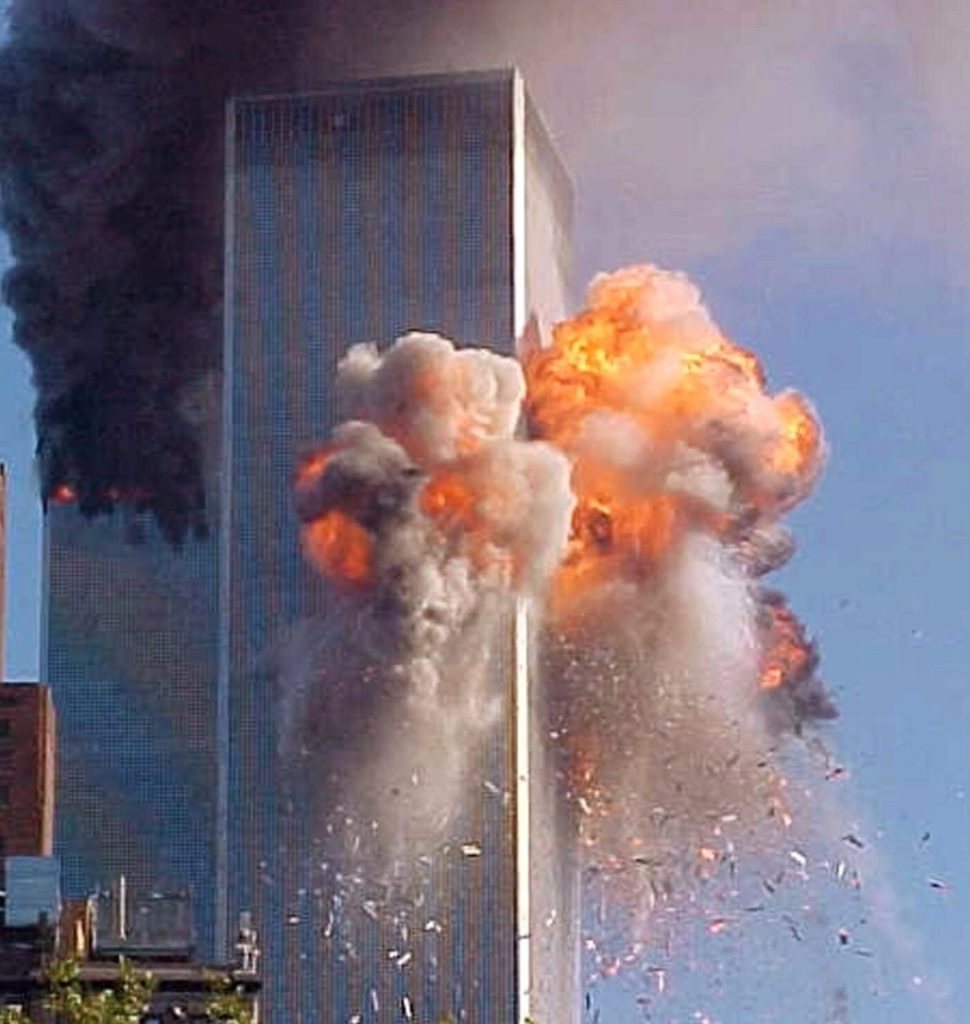 A fireball exploded from the South Tower. (AP Photo/Carmen Taylor) 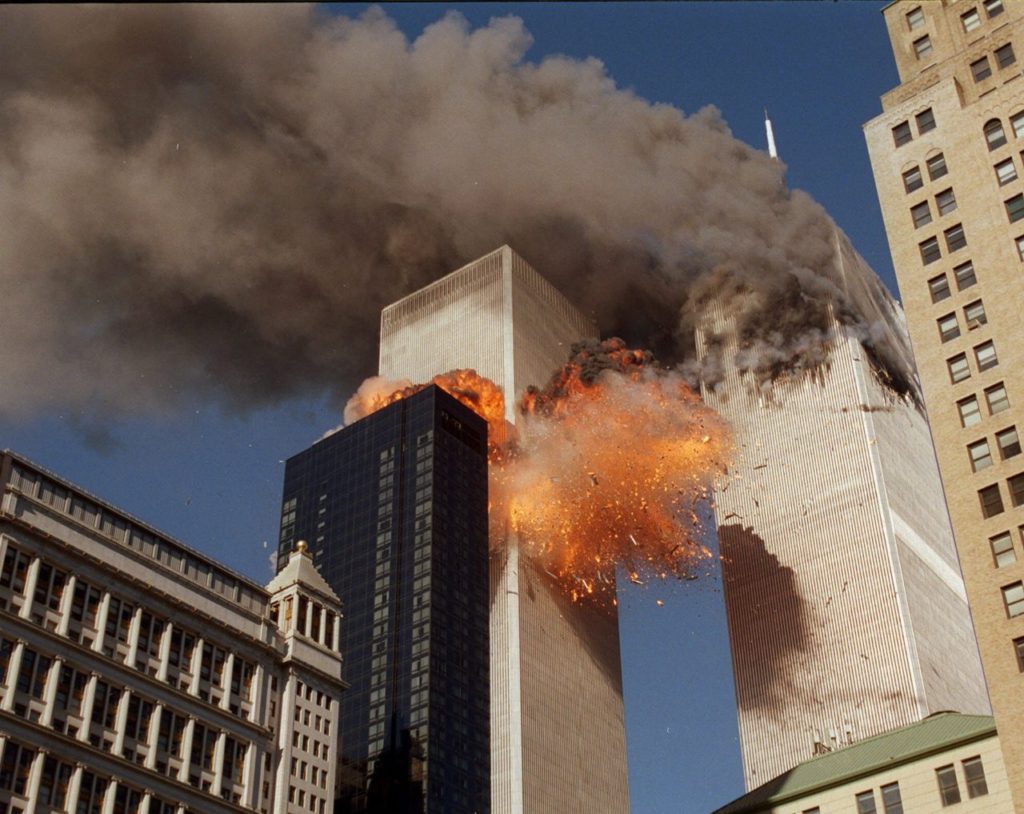 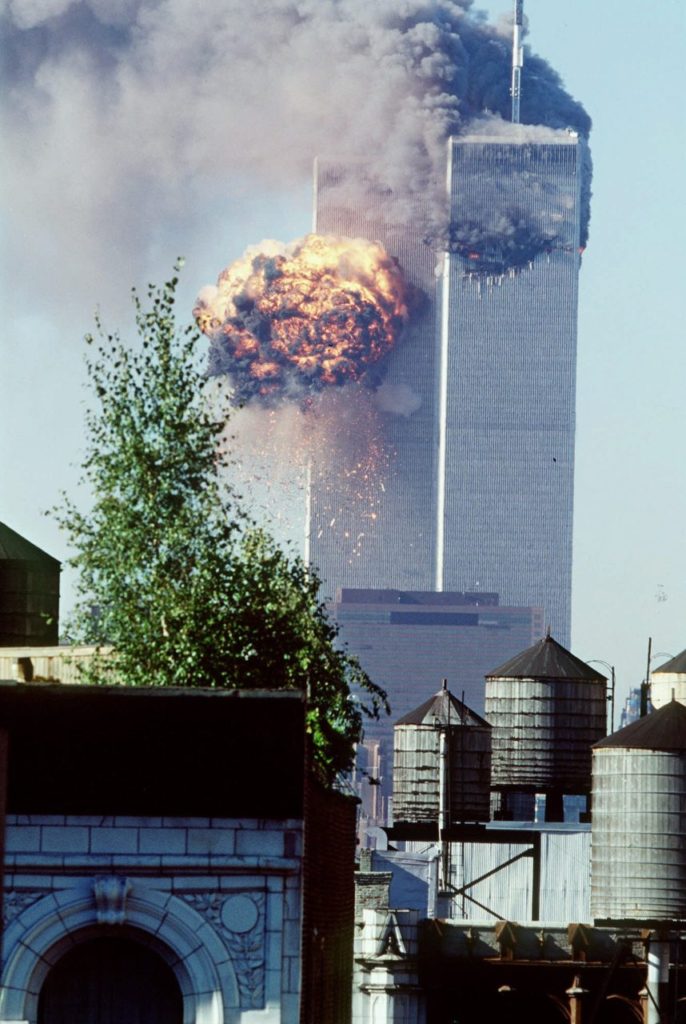 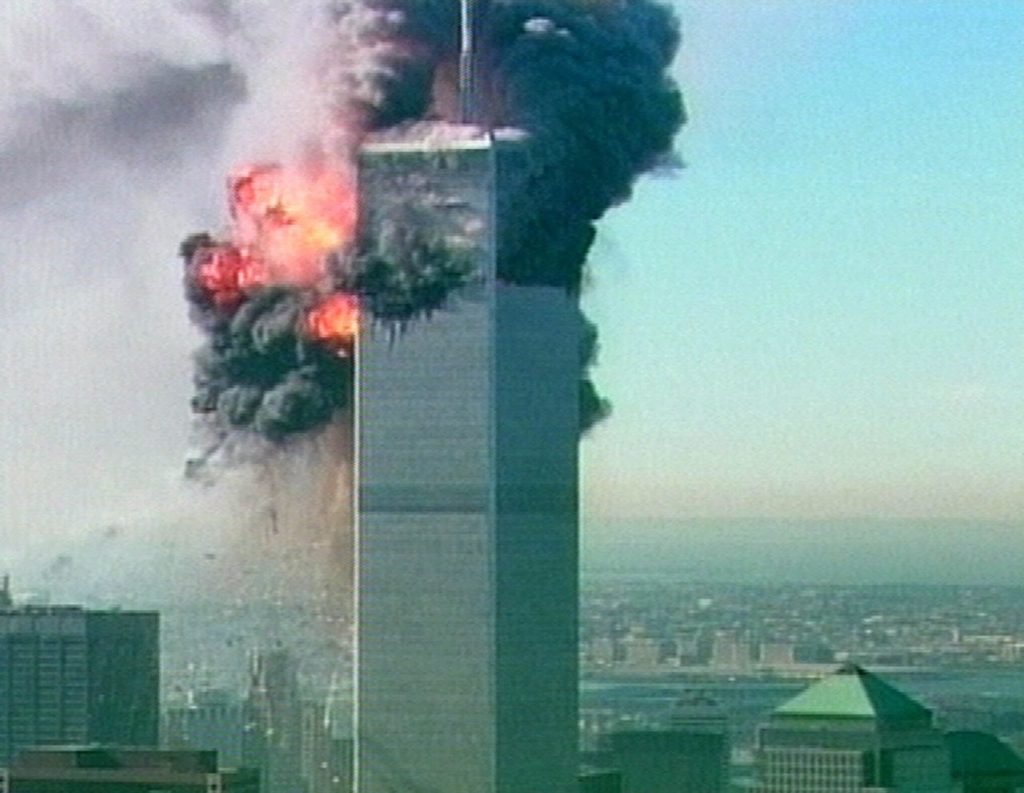 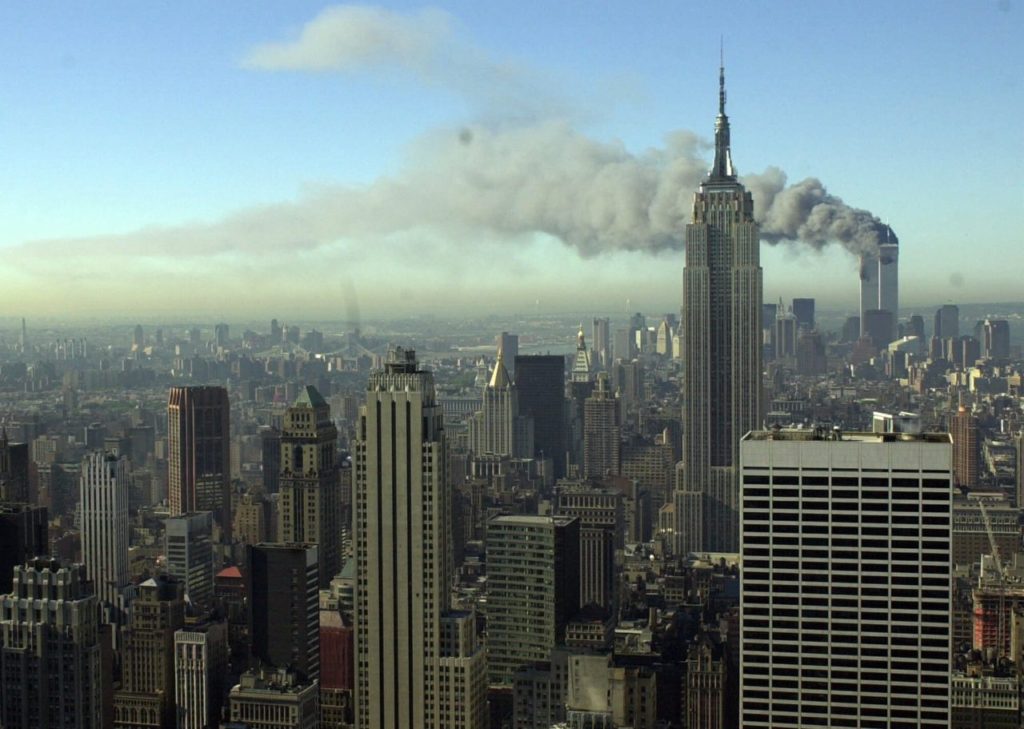 He was informed about the attacks when his chief of staff, Andy Card, whispered in his ear: “A second plane has hit the second tower. America is under attack.” 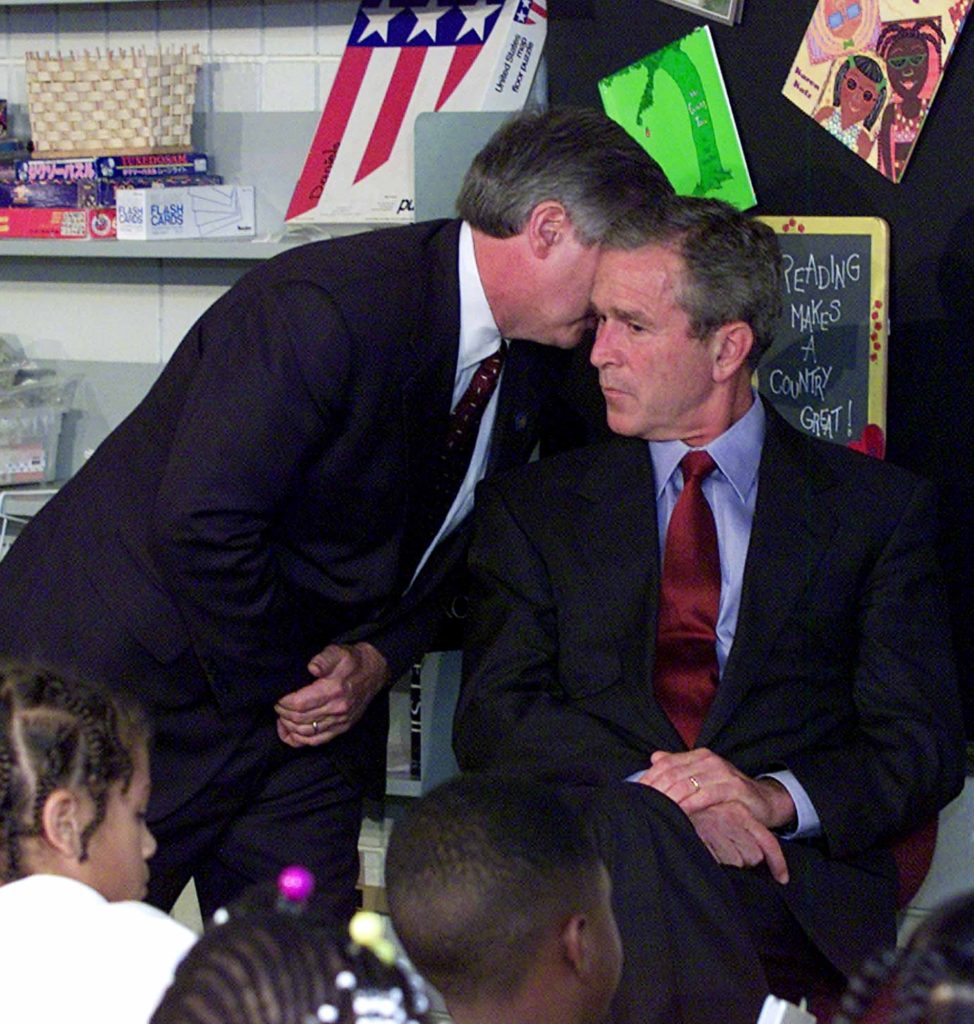 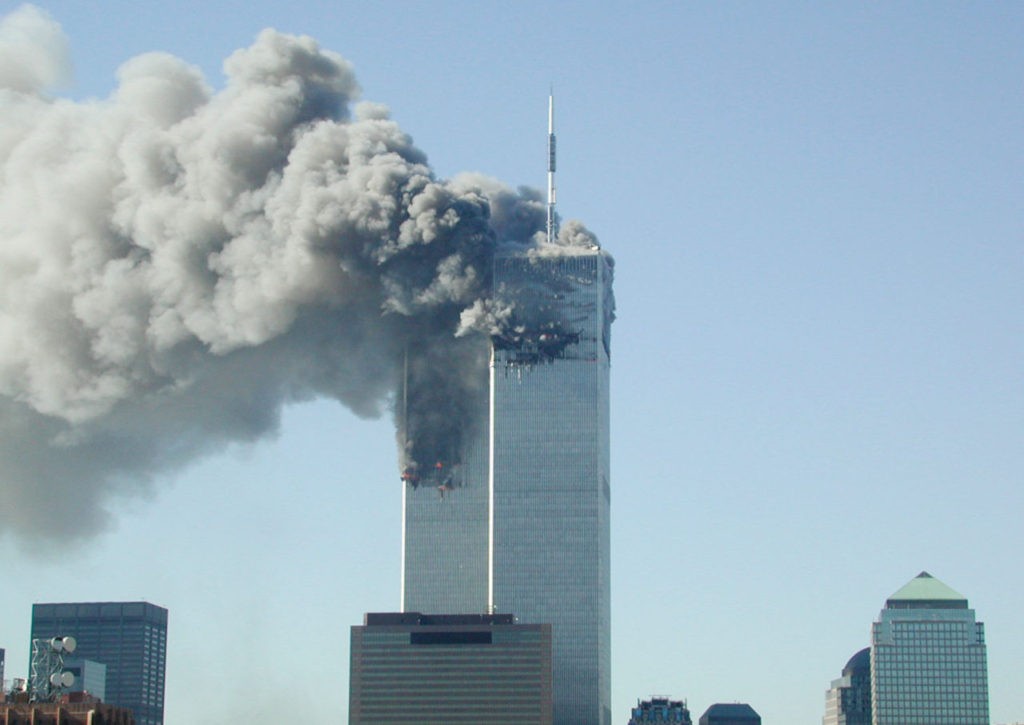 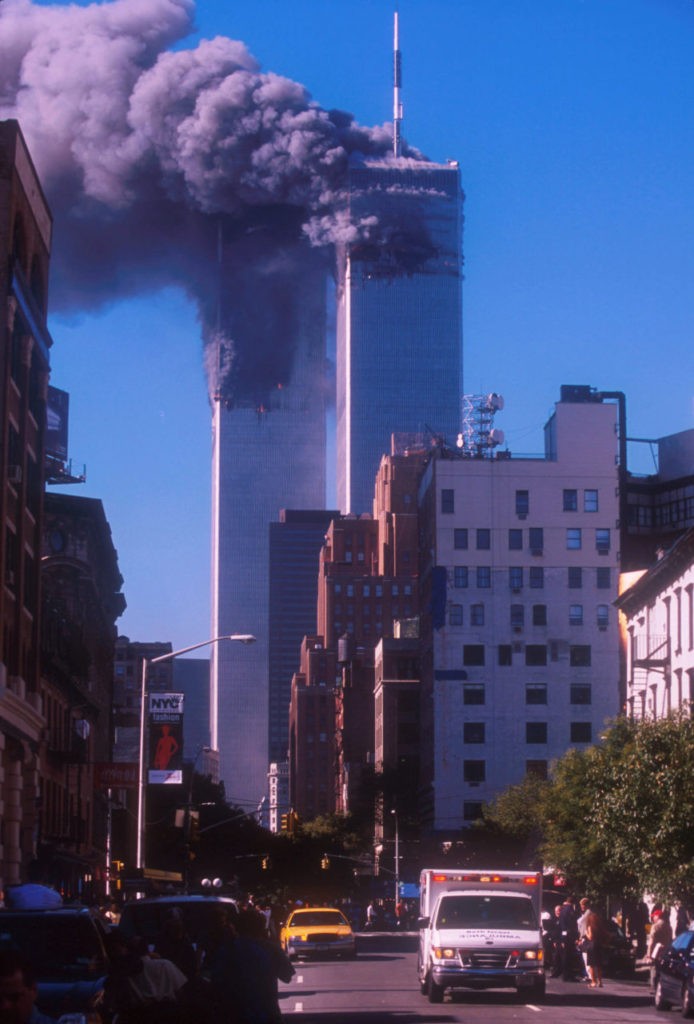 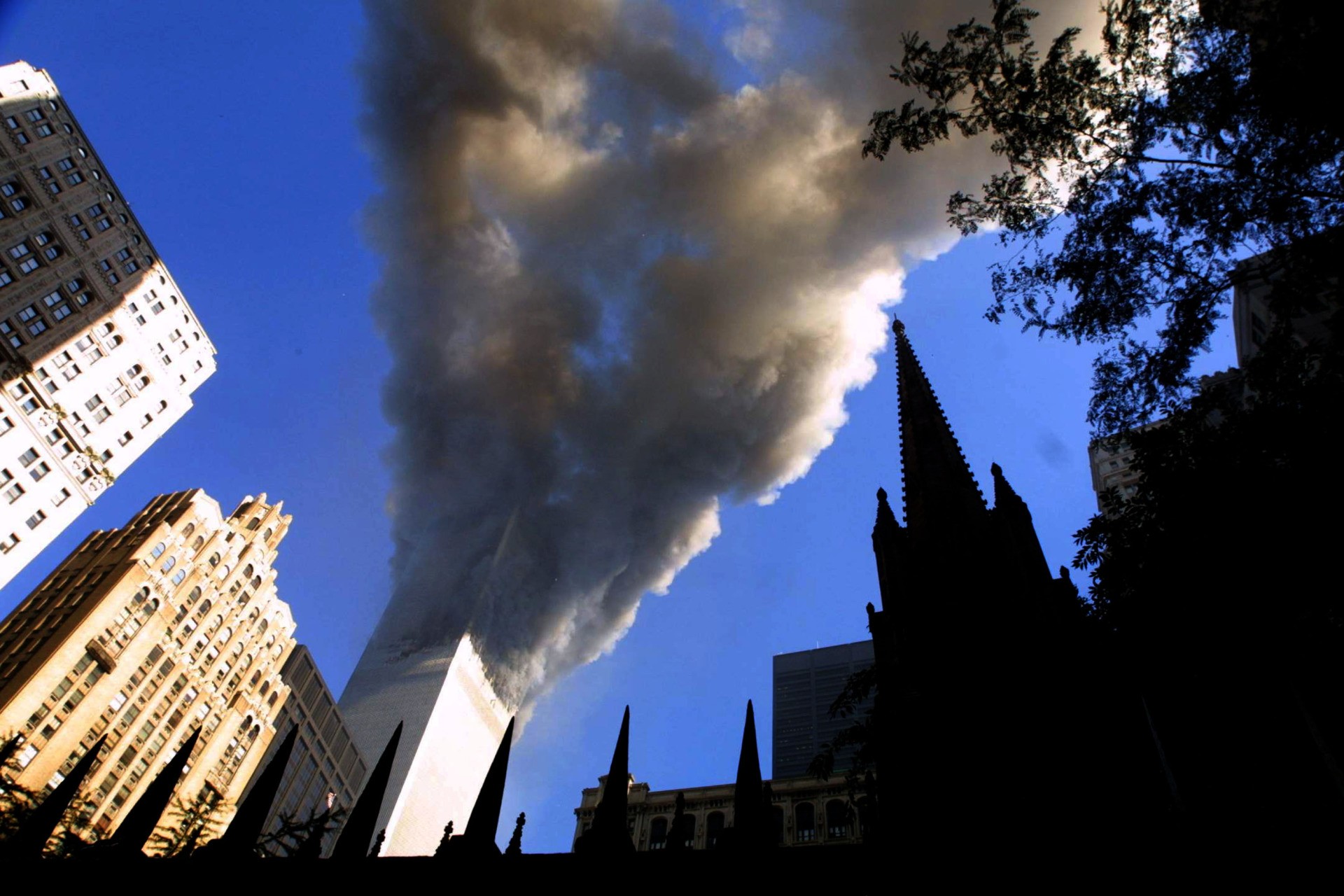 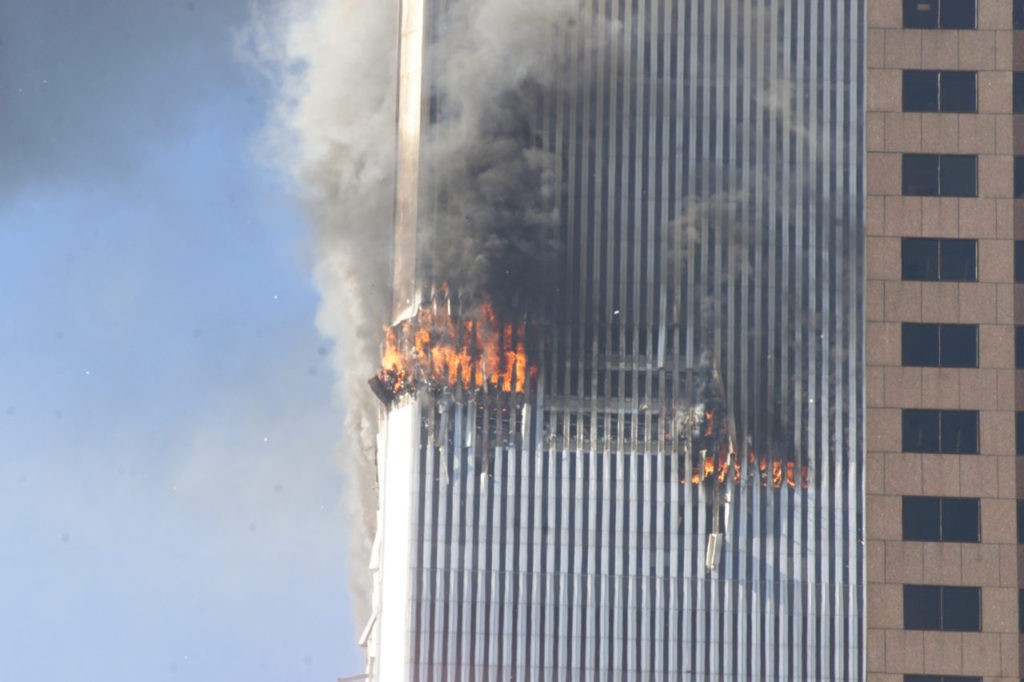 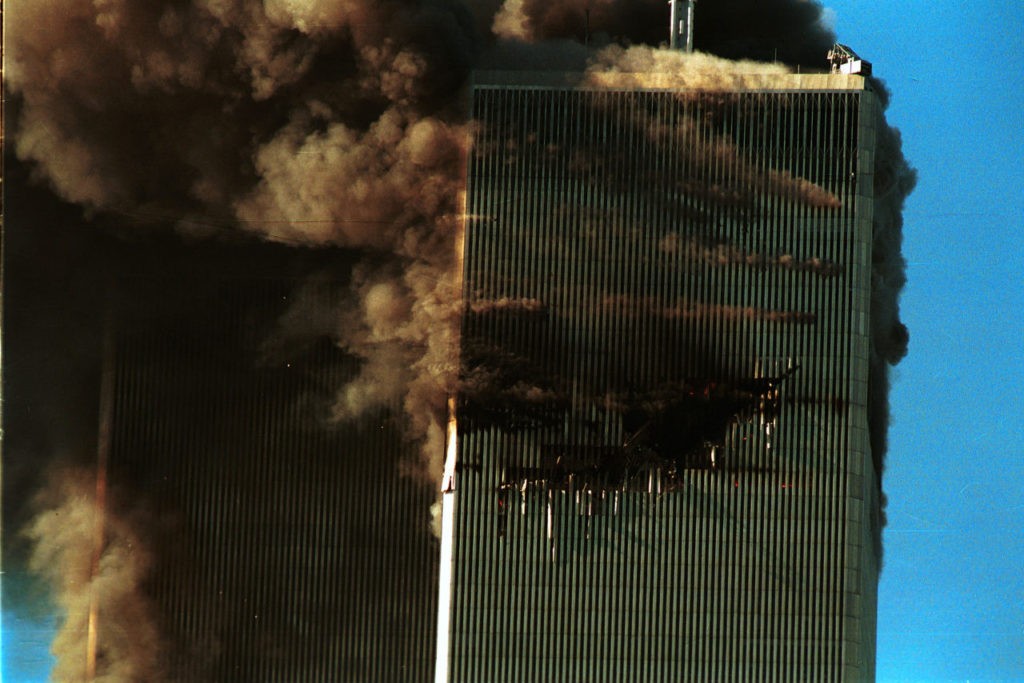 On the streets below, New Yorkers watched in shock at the smoke billowing from the towers and the desperate people hanging from the windows or leaping to their deaths to escape the fire.

Some were seen making the Sign of the Cross before they jumped.