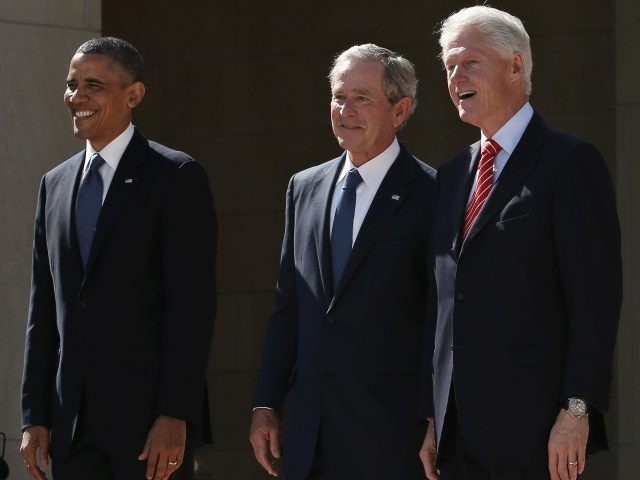 President Joe Biden is looking to team up with former Presidents Bill Clinton, George W. Bush, and Barack Obama, as well as multinational corporations, to bring Afghans to the United States for permanent resettlement.

This week, former officials with the Clinton, Bush, and Obama administrations launched the organization Welcome.us which will work with multinational corporations like Airbnb, Walmart, Starbucks, Instacart, Facebook, Microsoft, and Chobani to provide financial support to Afghans arriving in the U.S. as part of Biden’s massive resettlement operation.

Biden has said he hopes to resettle about 95,000 Afghans across the U.S. over the next 12 months. In a 21-day period from August to September, Biden brought more than 48,000 Afghans to the U.S. for resettlement — a population more than four times that of Jackson, Wyoming.

Instacart is donating 25,000 “culturally appropriate grocery meals” to Afghans arriving in the U.S. while Walmart donates $5000,000 in grant money to Welcome.us. Facebook is giving Welcome.us $150,000 in ad credits.

Starbucks has pledged $350,000 in grants to “nonprofit organizations supporting Afghan Special Immigrant Visa (SIV) applicants and refugee resettlement” while Microsoft executives have said they will give $1 million in “cash, technology, and services to support the evacuation and resettlement of refugees.”

“America is at a critical moment in our history — it is our duty to recognize our common humanity and welcome refugees from Afghanistan with open arms,” Chobani CEO Hamdi Ulukaya said in a statement.

Clinton, Bush, and Obama, as well as former First Ladies Hillary Clinton, Laura Bush, and Michelle Obama, are serving as honorary co-chairs to Welcome.us. The organization is being backed by Rockefeller Philanthropy Advisors which has ties to billionaire George Soros’s Open Society Foundation.

The Bushes said in a statement:

Thousands of Afghans stood with us on the front lines to push for a safer world, and now they need our help. We are proud to support Welcome.US and the work to help Afghan families get settled and build new lives. We stand ready to show our new Afghan neighbors and the rest of the world how a welcoming and generous spirit forms the backbone of what makes our country so great.