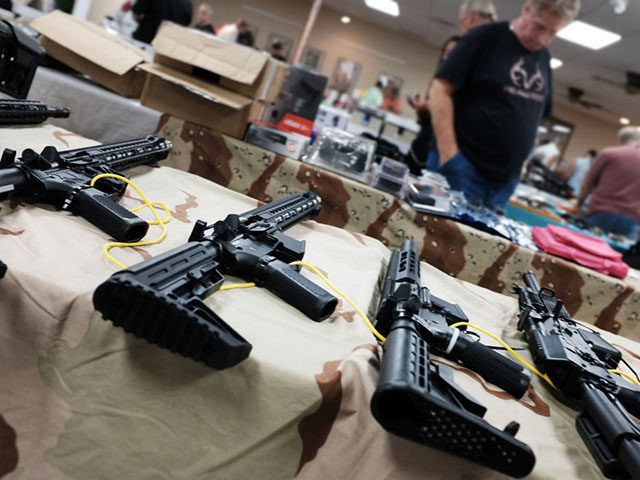 Kobach: Gun Control Lies that Democrats Will Tell in the Days Ahead

Before Congress took its August break, Senate Majority Leader Mitch McConnell declared that when the Senate returns, it will take up gun control in light of the El Paso and Dayton mass shootings. He said, “What we can’t do is fail to pass something.”

That statement has the progressive Left licking their chops, hopeful that a cowed Republican majority in the Senate will pass new gun control measures – with universal background checks, red flag laws, restrictions on AR-style rifles, and magazine capacity limits all on the menu. When the Senate debate begins next week, Democrats will inevitably repeat several lies that have gained traction on the Left in recent years. Here’s the truth.

#1. Unlike other countries, America is plagued by mass shootings.

The Left claims that because the possession of guns in America is greater than in other countries, that causes the incidence of mass shootings to be higher too. However, that claim is based on a false premise. While the first statement is true, the second statement is false.

This lie is particularly misleading in the wake of the El Paso and Dayton mass shootings. Both shooters purchased their firearms legally from dealers who were Federal Firearms Licensees (FFL), and both passed the background checks. Therefore, existing background checks did nothing to stop the shootings, and universal background checks (compelled by H.R. 8, which passed the Democrat-controlled House in February) certainly would not have changed anything. Meanwhile law-abiding citizens would find it difficult to lend or sell firearms to family and friends.

Although background checks are necessary and do serve a legitimate purpose, as I have written previously, the biggest problem with the whole background check system is that it is routinely circumvented by criminals. Instead of buying the gun himself, the criminal simply has a person with a clean record buy the gun for him. These “straw purchaser” arrangements are illegal, but they’re almost impossible to detect and extremely difficult to prosecute. Indeed, it appears that the 2015 San Bernardino mass shooter acquired his firearms that way.

Whenever a mass shooting occurs, Democrats typically push for laws forbidding guns in locations like that where the shooting took place. They evidently believe that a plastic sign on the door saying that no guns are allowed will stop potential shooters. It’s a fantasy. Worse, it serves as an invitation to criminals. One might as well post a sign saying “defenseless victims inside.”

The empirical data show just how dangerous gun free zones are. As pointed out by John Lott Jr., fully 98 percent of mass public shootings since 1950 occurred in places where citizens are banned from having guns. Most shooters recognize that they will encounter less resistance if their intended victims are unarmed.  Or stated differently, the only thing that stops a bad guy with a gun is a good guy with a gun; and the criminals know it.

The Left loves to hate AR-style rifles, better described as “modern rifles.” Their collapsible stocks, detachable magazines and general cosmetic features cause gun control advocates to hyperventilate. These firearms look like military rifles, therefore they must be bad; or so the Left believes. Hence the Left’s constant demand to institute another “assault weapons ban.”

However, it turns out that the overwhelming majority of mass shooters don’t actually use AR-style rifles. The Congressional Research Service wrote a lengthy report on this subject in 2015, defining a mass shooting as one in which three or more people are killed in a single incident. The study found that out of 317 mass shootings between 1999 and 2013, offenders used AR-style rifles in 31 incidents – or only 9.78% of the time.

This shouldn’t be particularly surprising. AR-style rifles are difficult to conceal, and semiautomatic pistols can deliver just as many bullets just as quickly. That’s why AR-style rifles aren’t usually used by most mass shooters, or by other criminals either. The notion that banning this type of firearm would put a dent in mass shootings is nonsense.

Perhaps the most idiotic pro-gun-control lie was delivered by Joe Biden at a campaign event in June. He said:  “If I get elected president of the United States of America with your help, if that happens, guns, we have the capacity now in a James Bond-style to make sure no one can pull a trigger unless their DNA and fingerprint is on it. We have that capacity to do it now.” He repeated a similar claim during the second night of the first Democratic presidential debates.

Biden has no idea what he’s talking about. There is no such thing as a gun that can perform a DNA match. DNA matching is a time-consuming process that involves highly specialized equipment. With regard to fingerprints, at least one company is trying to develop a gun that can recognize a fingerprint, but it’s in the early development stage—and it has encountered all sorts of problems. There are no “smart guns” like Biden described currently on the market.

The closest thing to a smart gun that exists is a pistol that requires a matching bracelet in the vicinity for the gun to operate. However, that gun is easily defeated by about $15 worth of magnets; and it costs $1,800 – about four times the price of an equivalent pistol. If ever the fingerprint technology makes it to market, it will undoubtedly be even more expensive. And that’s the problem with any law requiring gun dealers to sell only smart guns if the technology becomes viable someday. The average gun buyer won’t be able to afford them.

But that’s exactly what the Left wants to see happen. If the Second Amendment forbids them from disarming all Americans, then they’d love to see firearms and ammunition become too expensive for most people to buy.

These are the lies that will be told in the U.S. Senate in the coming weeks—both by Democrats and by moderate Republicans. Let’s hope that the rest of the Senators do their homework and rebut such lies with the truth.