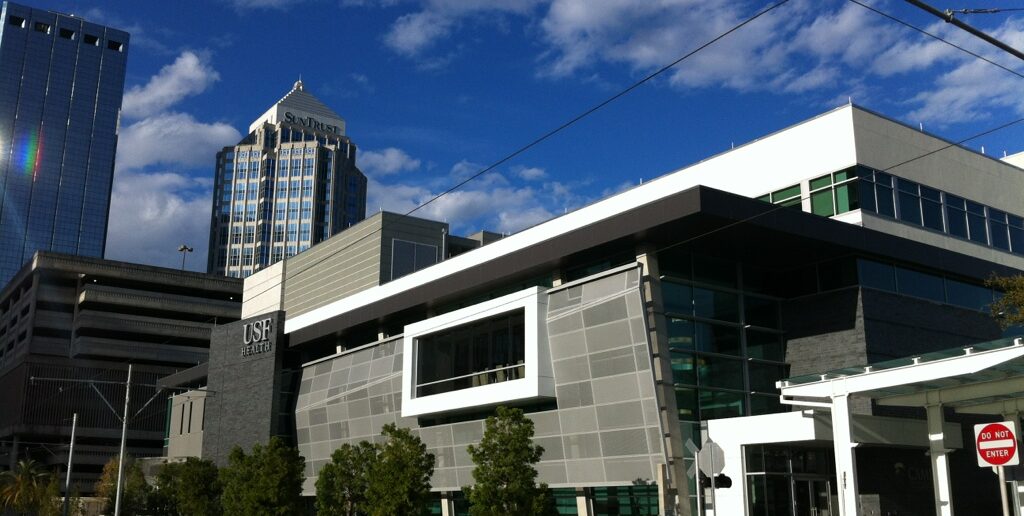 These Are The Top American Cities For Starting A Small Business

Friday’s jobs report has helped stoke speculation that the American labor market is finally beginning to cool (though the 136k jobs number was still better than the whisper number, which saw September payrolls sinking below 100k). As the pace of hiring slows, more Americans might be forced to make bold career moves – like deciding to start their own business.

And why not? As Adrian Mak wrote in a recent blog post for AdvisorSmith, new business formation is a critical driver of the American economy, even as large corporations continue to strengthen their grip.

Using data gleaned from a recent study that looked at 353 US cities across all 50 states, AdvisorSmith ranked the best US cities for starting a small business.

All told, the US has roughly 6 million businesses with more than one employee. In 2018 alone, approximately 750,000 new businesses were created in the US.

Of course, only a fraction of these businesses will survive longer than 5 years.

And unsurprisingly, the top states for small-business creation are mostly in the West and South, with Montana taking the No. 1 spot. 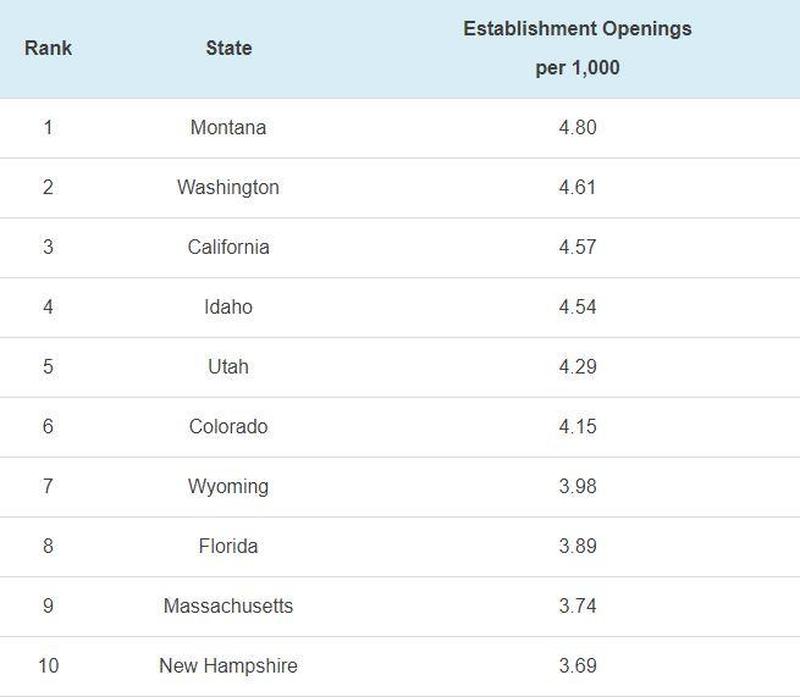 Small and mid-size cities in the West accounted for 9 of the top 10 cities where people are most likely to start a business. 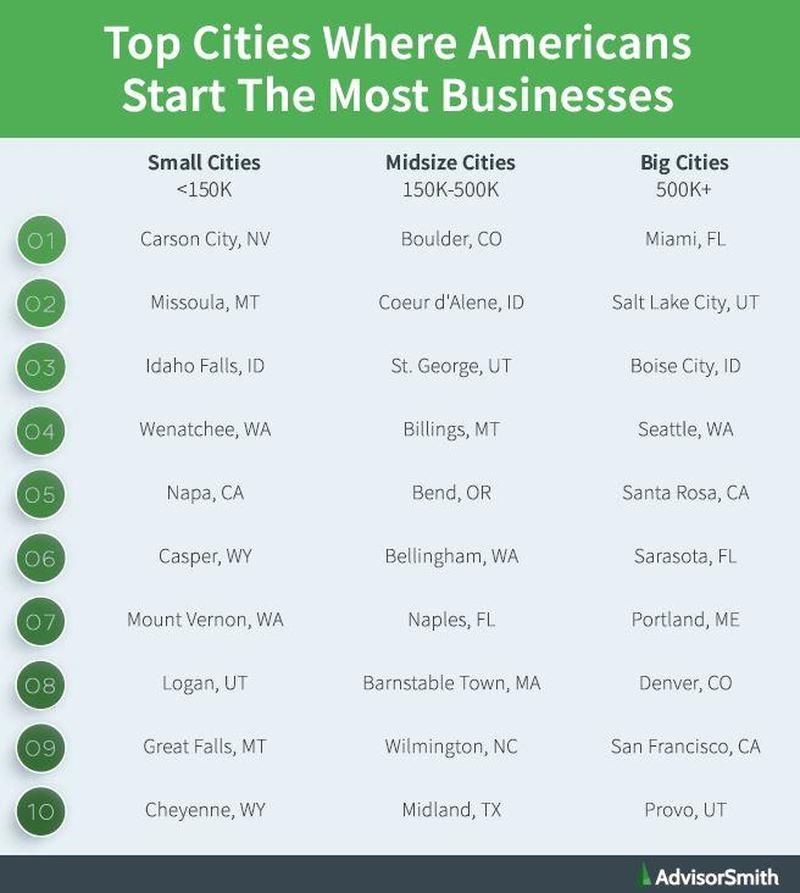 Taking a step back, AdvisorSmith also ranking the top cities across the three categories.

Here’s a breakdown of the top five (text courtesy of AdvisorSmith):

As the capital of Nevada since the state was established in 1864, Carson City was named after the American frontiersman Kit Carson. The city was founded as a stopover for travelers to California, but it later gained substantial population when silver was found nearby at Comstock Lode. Located just east of Lake Tahoe and south of Reno, Carson City is a center for both business and politics in Nevada. The city also has some tourism-related economic activity, with gambling and hospitality being contributors. As the city with the highest rate of new job creation in the country, Carson City had 4.61 new businesses started per 1,000 residents.

Boulder is a midsize city located 25 miles northwest of Denver at the foot of the Rocky Mountains. The city was initially settled by gold prospectors in the mid-19th century, and soon afterwards, it was chosen to be the main location for the University of Colorado. The existence of the University has exerted a strong influence on the history and economy of the city, with a highly-educated population and strong quality of life. Boulder is also well known for its strong culture of bicycling, which includes a substantial dedicated bike infrastructure. Boulder had 4.52 businesses started per 1,000 population in this study.

Missoula is a small city that started as a trading post in the mid-1800s. The city is located along the Clark Fork River in western Montana, and it is the second largest city in Montana. Lumber became a key industry in the city, along with education as the University of Montana was established in 1893. The existence of the University has provided the city with a highly-educated workforce and encourages the development of technology startups, in addition to being the city’s largest employer. Missoula had a very high new business creation rate of 4.09 per 1,000 residents.

Coeur d’Alene is located in the northwestern portion of Idaho, near the city of Spokane, Washington. Coeur d’Alene is situated on Lake Coeur d’Alene, with a growing economy driven by resort tourism as well as nearby ski resorts. The city has many outdoor activities, including boating, mountain biking, kayaking, hiking, riding ATVs, hunting, and fishing. Locals call the city “Lake City” or simply CDA. Entrepreneurs in Coeur d’Alene started 3.87 new businesses per 1,000 people in our study.

Located in the southern part of Utah, adjacent to the Arizona border, is St. George, a midsize city near several well known national parks, such as Zion National Park, Bryce Canyon National Park, and the Grand Canyon. Tourism to these parks is an important part of the economy in the city. Due to the city’s warm desert climate, golf is another important draw to the city, with many residential communities oriented around golf courses. St. George also hosts the headquarters of SkyWest Airlines. St. George had a new business creation rate of 3.83 new businesses created per 1,000 population.