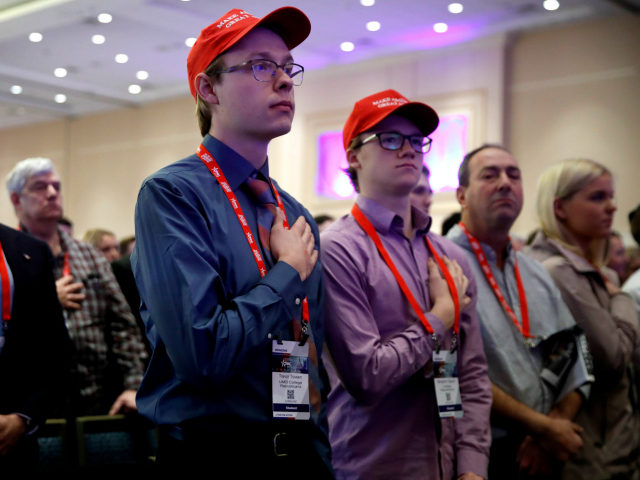 By TDO on 11/18/2019 0 Comments
Trevor Tovsen, center, with the University of Maryland College Republicans, says the Pledge of Allegiance, during the Conservative Political Action Conference (CPAC), at National Harbor, Md., Friday, Feb. 23, 2018, where President Donald Trump is expected to speak. (AP Photo/Jacquelyn Martin)

Students at Grand Valley State University in Michigan voted last week to stop reciting the Pledge of Allegiance at student government meetings over concerns that it is discriminatory and oppressive.

Dorian Thompson, a student senator at Grand Valley State University, told The College Fix that student government members made a strong push to end the tradition.

“The arguments to remove it were to create an inclusive environment, that it represented an oppressive government, and that there are international students that we should be representing,” Thompson said in a short comment.

“Of course our country doesn’t have the brightest past with human rights issues, but with liberty and justice for all, that says right there no matter what interesting times we are in we will always rise above it and go forward and not backwards,” Thompson added.