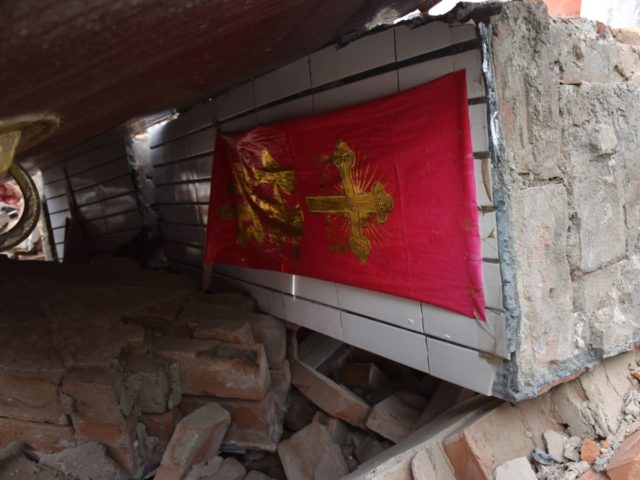 Religious freedom watchdog groups are accusing the Chinese Communist Party (CCP) of using the Wuhan coronavirus epidemic as an opportunity to intensify their crackdown on religion, bulldozing some churches and placing others under heavy surveillance.

“China is now holding itself up as a model for fighting the coronavirus. But fighting the pandemic hasn’t stopped communist officials from persecuting Christians,” Todd Nettleton, a spokesman for the nonprofit group Voice of the Martyrs (VOM), told Fox News on Tuesday.

Another prominent activist, Bob Fu of China Aid, shared a video of Chinese officials demolishing a church in the city of Yixing:

Religious persecution continues even in the midst of #WuhanVirus March 11 Xiangbaishu Church in Yixing city, Jiangsu province was destroyed by #CCP govt. Cross is our Glory大疫当前，江苏宜兴香柏树教会,于3.11日遭到强拆.举国上下深感人民的苦难，但谁知道在十字架上那位上帝之子的苦难？ pic.twitter.com/wp35ZexYIu

Other churches have reportedly been vandalized by Chinese officials and orders have been given that effectively ban “unregistered” religious services on the grounds of public health. On the bright side, VOM saw the prevalence of medical masks due to the coronavirus as an opportunity to evade China’s pervasive facial-recognition systems and proselytize with less fear of being identified and persecuted.

Buddhists and Taoists also reported the suppression and demolition of their temples, a process that appeared to be intensifying just as the coronavirus exploded out of Wuhan. Worshipers bitterly noted that local officials have a habit of abruptly deciding that temples built with their approval failed to meet some obscure building code and must be demolished immediately. Not even hoisting Communist flags and papering temples with posters of China’s authoritarian ruler Xi Jinping was enough to save the targeted temples.