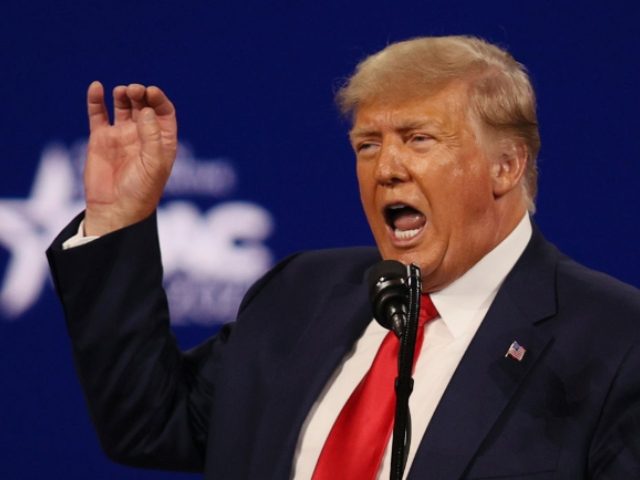 Trump emphasized that “we must the integrity of women’s sports”:

Donald Trump: "What coach wants to recruit a young woman if her record could be easily broken by someone who was born a man?…

..I think it's crazy, we must protect the integrity of women's sports."

Trump’s call to protect women’s health and their athletic achievements from being harmed or corrupted by biological males infiltrating their sports, drew widespread backlash from liberal elites in politics, entertainment, and media:

TMZ Sports ridiculously claimed that Trump’s attack was directed at the transgender community:

https://t.co/oEqbA4W5V7 Donald Trump took direct aim at the transgender community at CPAC 2021 — complaining women's sports were being turned upside down … and vowing to protect it at all costs.

In a botched attempt to show everyone how smart he is, writer Jeff Sharlet over-thought the comment and ended up saying something silly:

PBS White House correspondent Yamiche Alcindor decided to ignore the health and well-being of female athletes by trying to twist Trump’s comments into an attack on the transgender community.

While in office, he repeatedly limited the rights of transgender Americans. Many criticized him as being transphobic.

Calling the GOP the party of alleged rapists and enablers the day after a second sexual harassment claim against New York Governor Andrew Cuomo became public is something.

This x 1000. The GOP is the party of alleged rapists like Donald Trump, pedophile enablers like Jim Jordan, and unrepentant abusers like Brett Kavanaugh. Their attacks on trans people is crude, ham-handed misdirection that would not fool Penn and Teller. https://t.co/yYWyETtm3C

Of course, you know Vox had to say something:

Some, like POLITICO columnist Jeff Greenfield, took the snarky road. Though, it is amazing the speed at which the issue of the health and safety of women became the source of mockery and scorn for the left.