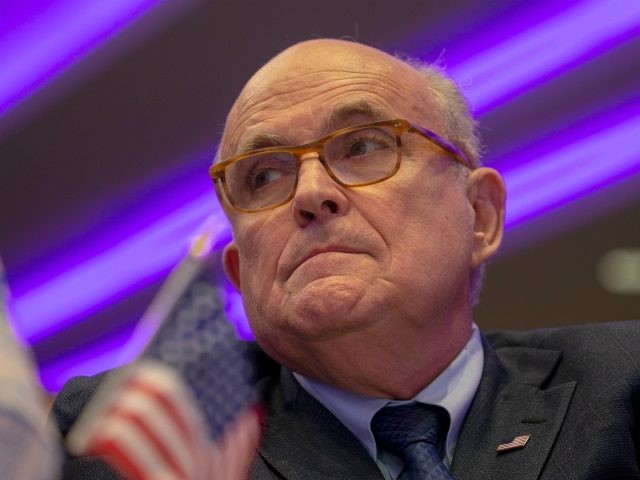 All three fake news outlets reported Giuliani had received a defensive briefing from the FBI warning him he was the target of a Russian influence campaign.

The FBI warned Rudolph W. Giuliani in late 2019 that he was the target of a Russian influence operation aimed at circulating falsehoods intended to damage President Biden politically ahead of last year’s election, according to people familiar with the matter.

The warning was part of an extensive effort by the bureau to alert members of Congress and at least one conservative media outlet, One America News, that they faced a risk of being used to further Russia’s attempt to influence the election’s outcome, said several current and former U.S. officials. All spoke on the condition of anonymity because the matter remains highly sensitive.

Correction: An earlier version of this story, published Thursday, incorrectly reported that One America News was warned by the FBI that it was the target of a Russian influence operation. That version also said the FBI had provided a similar warning to Rudolph W. Giuliani, which he has since disputed. This version has been corrected to remove assertions that OAN and Giuliani received the warnings.

The FBI stepped up its warnings about Russian disinformation before the 2020 election, including giving a defensive briefing to Giuliani, cautioning him that some of the information he was pushing on the Biden family was tainted by Russian intelligence’s efforts to spread disinformation, according to a person briefed on the matter.

The FBI’s defensive briefings are given by its counterintelligence officials and are separate from the criminal inquiry of Giuliani’s activities.

Correction: May 1, 2021
An earlier version of this article misstated whether Rudolph W. Giuliani received a formal warning from the F.B.I. about Russian disinformation. Mr. Giuliani did not receive such a so-called defensive briefing.”

WASHINGTON — Rudy Giuliani was given a so-called “defensive “briefing by the FBI in 2019 in which agents warned him he was being targeted by a Russian intelligence influence operation as he sought to gather opposition research on the Biden family, according to a source familiar with the matter.

CORRECTION (May 1, 2021, 5:20 p.m. ET): An earlier version of this article included an incorrect report that Rudolph Giuliani had received a defensive briefing from the FBI in 2019 warning him that he was being targeted by a Russian influence operation. The report was based on a source familiar with the matter, but a second source now says the briefing was only prepared for Giuliani and not delivered to him, in part over concerns it might complicate the criminal investigation of Giuliani. As a result, the premise and headline of the article below have been changed to reflect the corrected information.

You’ll note that the NBC retraction informs us the original story was published based on “a source,” so one source, one goddamned source.

Oh, and naturally, CNNLOL spread the lie even further: