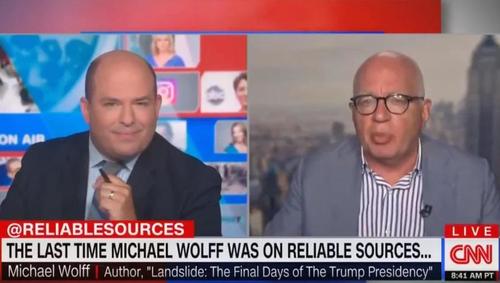 Controversial author Michael Wolff (of dubious Trump White House ‘tell-all’ and earpiece malarkey fame) was trotted out on CNN Sunday, where he proceeded (was allowed) to excoriate “Reliable Sources” host Brian Stelter for doing a “terrible job” and being “full of sanctimony.”

“You become part of, one of the parts of the problem of the media. You know, you come on here, and you have a monopoly on truth – you know, you know exactly how things are supposed to be done. You know, you are why one of the reasons people can’t stand the media, I’m sorry.” said Wolff.

To which Stelter laughed, saying “You’re cracking me up.”

“It’s your fault,” Wolff shot back, to which Stelter asked what he could do better.

“You know, don’t talk so much, listen more. You know, people have genuine problems with the media, the media doesn’t get the story right. The media exists in its own bubble,” Wolff replied. “Also, you’re incredibly repetitive. It’s week after week,” Wolff continued. “I mean, you’re the flip side of Donald Trump. You know, fake news and you say virtuous news.”

When Stelter then asked him why he’s been on CNN several times this week, Wolff hung his head and replied: “You know, I’m a book salesman.”

Michael Wolff: “You are the flip side of Donald Trump… most people don’t want to turn to Brian Stelter to tell us what’s real.”

Stelter: “Then why did you bother coming on CNN a few times this week?”

Were Wolff’s comments truly off-the-cuff? Or as one Zero Hedge reader suggested, could CNN be resorting to a “very strategic capitulation” in order to “turn over a new leaf” and regain credibility amid dismal ratings and all-time low trust in the media?