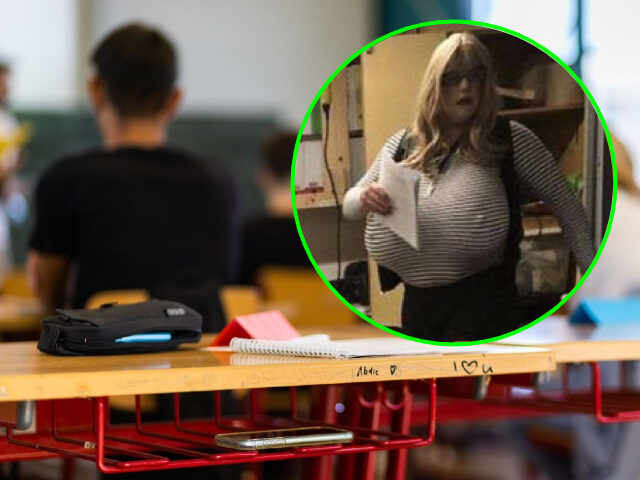 An Ontario, Canada, high school is defending one of its male shop teachers’ decision to teach young students while wearing a gigantic prosthetic bust.

The male teacher, who recently began identifying as a female and calling himself Kayla Lemieux, decided to wear the unnaturally large bust with prominently protruding nipples to class in an apparent attempt to exercise his “female identity.”

Many critics, however, see the move as caricaturing women and fulfilling a sexual fetish in front of minors.

I don't remember my shop teacher looking like this🧵 pic.twitter.com/pHHr58Zspa

After pictures of the performative teacher circulated online, the school promptly came out in his defense, telling concerned parents and students that, “We would like to take this opportunity to reiterate to our community that we are committed to establishing and maintaining a safe, caring, inclusive, equitable and welcoming learning and working environment for all students and staff.”

The school also said criticism of Lemieux’s actions would constitute discrimination under the Ontario Human Rights Code, explaining, “We strive to promote a positive learning environment in schools consistent with the values of the HDSB and to ensure a safe and inclusive environment for all students, staff and the community, regardless of race, age, ability, sex, gender identity, gender expression, sexual orientation, ethnicity, religion, cultural observance, socioeconomic circumstances or body type/size.”

Left-wing news outlets defended the teacher, saying that while “based simply on human physiology … the teacher is wearing a prosthetic chest piece of some kind,” criticism of the male teacher was, in fact, misogynistic.

“This is far from the first time that a woman educator has been criticized widely online for wearing something deemed ‘inappropriate’ or ‘distracting’ to work, nor is it the first time that a teacher from the LGBTQIA2S+ community been harassed for expressing their identity,” the outlet wrote, attempting to normalize the actions of Lemieux.